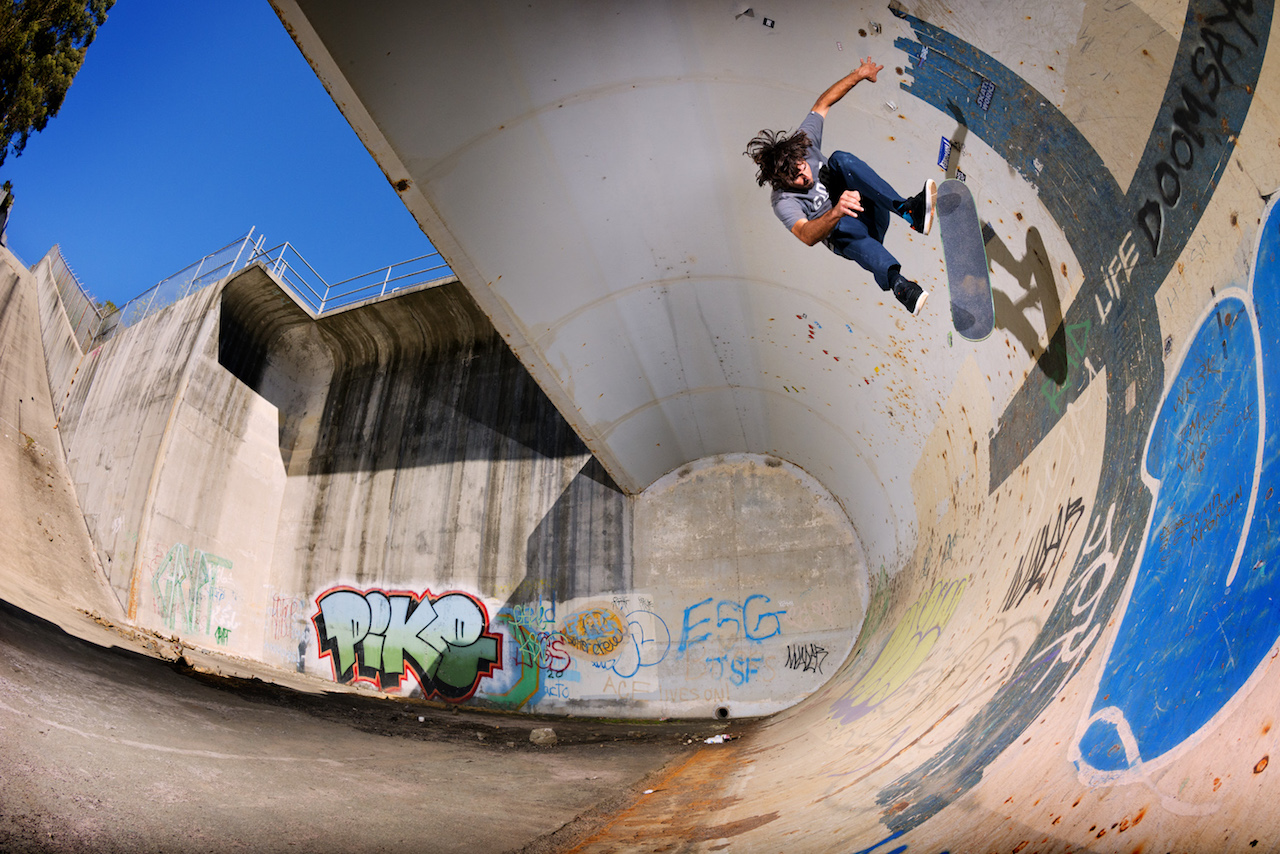 What is your impression of the general acceptance of technology among skate customers?
Overall, we’d like to see everyone skate our Impact constructions. The majority of our riders skate one of our tech constructions, but the general acceptance has been somewhat muted at the retail level. It hasn’t been fully embraced yet. When people do make the purchase of a tech construction they are instant believers though! Maybe it just has to do with price. Obviously when you start putting technology into boards, the boards cost more money to produce and have a higher retail price.

Skateboarding in general isn’t the cheapest thing to do and if you are skating a bunch, you’re breaking boards and you’re destroying boards. And if a kid has to go back to his parents to ask for more money, or they have to work harder to pay more for a board that becomes somewhat of a barrier. People understand and get it, but they can’t get over the price threshold.

The euro and dollar have evolved, does that make it harder to maintain prices?
Yeah, when you start getting into currency exchanges, that’s a whole extra layer of complexity. The dollar has strengthened recently and that has made all of our products more expensive abroad. So that makes it even harder for someone to attain a technology board.

What are your main technologies?
First of all, Impact Support features two [carbon fiber] discs on the bottom. That was one of the first technologies we did. You are putting the technology in the bottom veneer on the truck location and that’s just strictly for absorbing impact from a heavy land. You don’t land “bolts” all the time, this is gonna help make your board last longer.

We have another construction where we have just an extra laminate on the top, called Impact Light. It’s a 7-ply deck, a little thinner than a Resin 7 board, and on the top really adds a lot of strength and stiffness to the board. This laminate on the top is what really gives a board its longevity.

The third construction we have is Impact Plus, which is combining the top laminate with the two discs on the bottom. The combination ends up being the most durable board we make.

What do you ride, personally?
The majority of us here at the [Dwindle] office [in Los Angeles] ride Impact Light. It’s about the same weight as a 7 ply board sometimes even lighter. That top laminate really makes the board last longer. I’m not a super high impact dude and prefer to skate ledges, but I can have a board last two to three months. Just from Impact Light, so if you have a kid who skates every day, you’re gonna see the longevity of a board go from two weeks to three-to-four weeks. With Impact Light and Impact Plus, I can say you’re gonna double the life of your board. 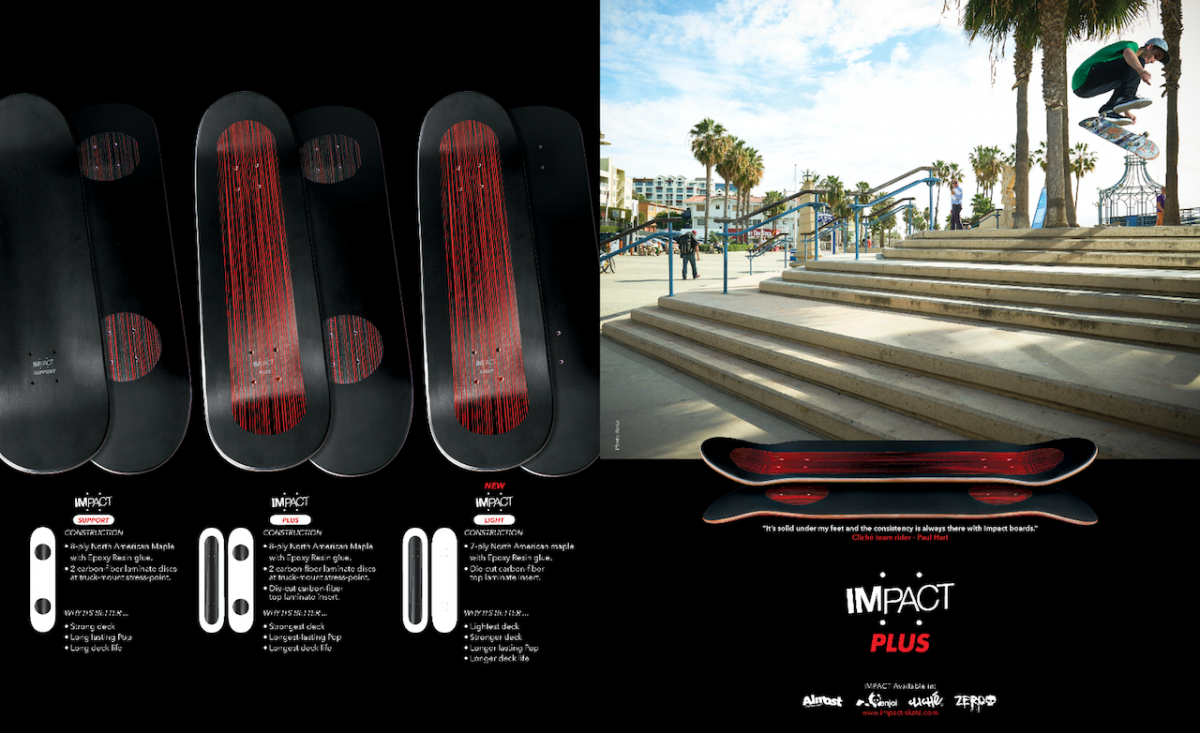 Then it’s a numbers game, if skaters buy two shop decks or spend the money on an Impact board and get a better deal, right?
The cost to get into that technology is higher but in the long run you’re spending less money because you are buying less boards. And that has even been seen from our pro riders. [Almost Skateboards pro] Chris Haslam has been kind of an advocate for this. Before he had to have ten decks on him for a two-week trip. Not only his luggage but also ten decks. Now with Impact he can just take two or three boards, and in some cases he’s even re-gripping the same board. So that’s the biggest difference right there, even a pro who can get as many boards as he wants is re-gripping an old board.

Cairo Foster also seems to be a big believer.
Well, we tried convincing him for a long time but he always wanted to stay with 7-ply boards. One time James [Craig] accidentally sent Cairo Foster some Impact Light boards and he was out in China trying a nollie flip down a double set 25 to 30 times and the board just kept going and going. And he said, “Wow, I understand the technology now, I understand why you put technology in your boards. I would have probably gone through five to six boards attempting this double set.” And he was fine trying and landing his trick and rode the same deck afterwards, which before would have never happened. He has since changed his mind and rides only Impact Light.

On that note, did you see the massive Jaws 25-stair ollie in France where upon the first time he lands, the board splits in half, severely hurting his knee?
With the Impact plus and Impact Light laminate on top, your board may snap – but it will not separate. That’s super important, you can really injure your knee if your board snaps and you do the “splits”.

What about direct, immediate benefits of technical boards in terms of responsiveness and snap?
Wood is an organic material and over time the cellular structure breaks down as you ride the board. It’s also subjective to environmental conditions such as moisture and temperature. Leave the board in the trunk of your board it will break down and lose its pop. What adding layers and technology to the board does, is basically prohibits this stuff from happening. When you put the [technical] top laminate in, the board retains its shape, its concave for much longer period of time. There is a point in time – especially in the nineties – when you step on your tail and you just knew, man, my board is done. You could just feel it. And now with technology boards that consistency stays there for the life of the board. You’re gonna end up getting a razor tail before you end up losing pop on these decks. Every amount of energy you put into a trick is going into the board, you’re not losing anything to the board flexing out. I can’t guarantee it will make you ollie higher, though (laughs). 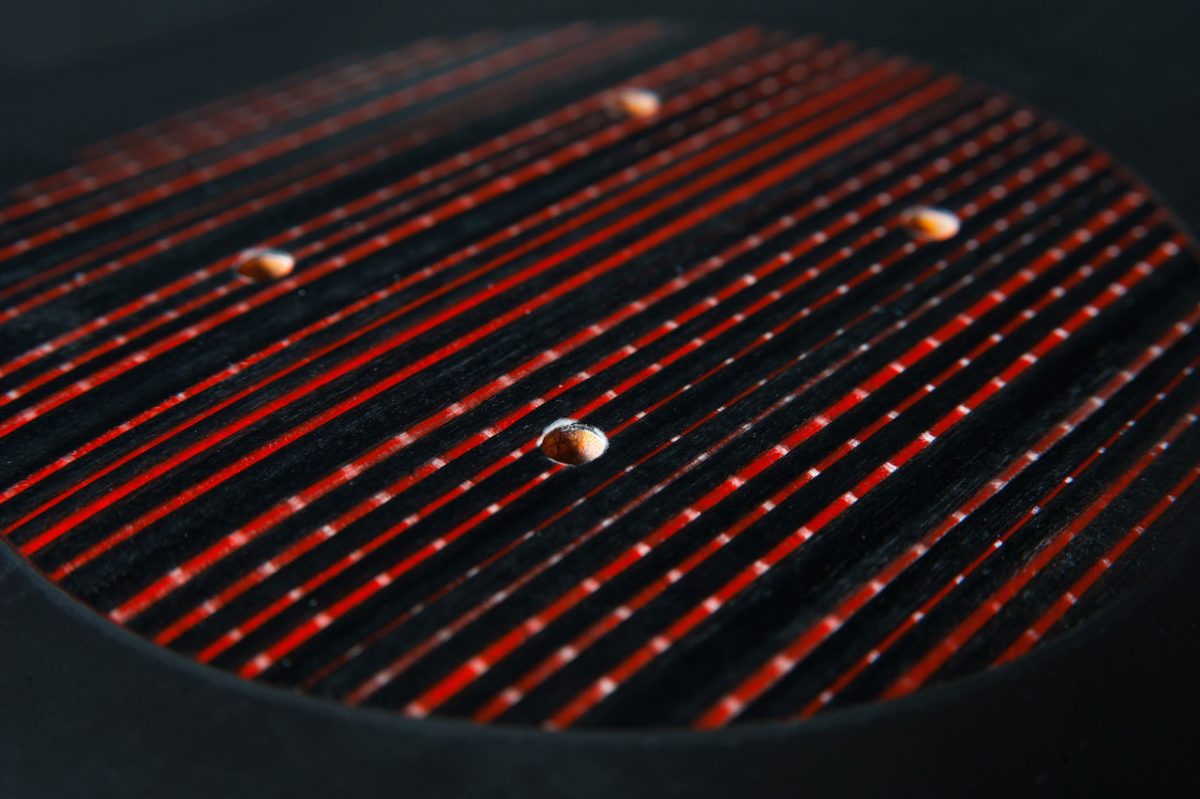 Do you engage in any testing under lab conditions?
We do testing at the factory where we apply increasing pressure to the middle of the board at a slow pace until it snaps and we track the percentage of increased resistance for technical boards.

But your “regular” construction decks are also quite technical, actually?
For our Resin 7 decks we were one of the first manufacturers to switch to resin, an epoxy based system instead of water-based glue. Water based glue is subject to environmental changes and the glue degrades over time, whereas we found that our resin glue remains stable and doesn’t degrade like water-based glues. I’ve had riders come from other companies and say that when they stand on our decks they can feel the difference. They just feel crisper, so even at that basic level by us using that epoxy resin we found that it makes a huge difference in our 7-ply boards.

And Dwindle was the first to use single-mold pressing for decks, right?
In our huge hydraulic presses at DSM [Douglas Street Manufacturing] we have nine sets of plates, but we only put one deck at a time between each set of plates. You’re putting a single blank in the press and they are all coming out exactly the same. We actually have a video narrated by Rodney Mullen about the entire process of how we manufacture our boards at DSM.

WHEELS
What are the advantages of technical wheel formulas, and what goes into the development of these technologies?
What people need to appreciate is that when you’re doing a slide, like a lipslide on a ledge, and you ride away without having a flat spot – that’s technology!

TRUCKS
How is technology benefitting truck geometries and weight in the truck segment?
Well, you can shave away the weight but you always need to provide the durability that people expect from a skateboard truck. It still has to be strong and durable. And that’s a very tricky thing. Most truck manufacturers are using the same alloy for their trucks and for most companies the difference boils down to how they manipulate the reinforcements within that truck, like the wing structure on the back and how it lines with the axle and that kind of stuff.

And in terms of innovation, the first generation of Tensor trucks – the company came from the mind of Rodney Mullen – featured a slider insert in the front of the baseplate to reduce friction while sliding a ledge. We still sell them and that was sheer genius for that type of ledge skating.

How would you explain to kids why they need more technology in their trucks?
A lot of technology in trucks actually boils down to material changes, and when you are approaching that, you start also getting into costs. That could be preventative for people. And with trucks you’re going into much higher price territory. And when you double the price, like for titanium trucks, it has to have advantages that people actually believe in. For us at Tensor what we have been able to do was introduce Magnesium, which provides a weight savings so it ends up being 25 to 29% lighter than aluminum, but it performs the same. So in our team, [Cliche pro] Andrew Brophy rides MagLights, and he also rides a board that’s 8.5 inches wide, and a deck this wide is heavy. So Mag Lights help keep the weight down and he now has so much more spring in his step. For us it’s an advantage to get that effect by changing the material without changing the truck geometry and design. 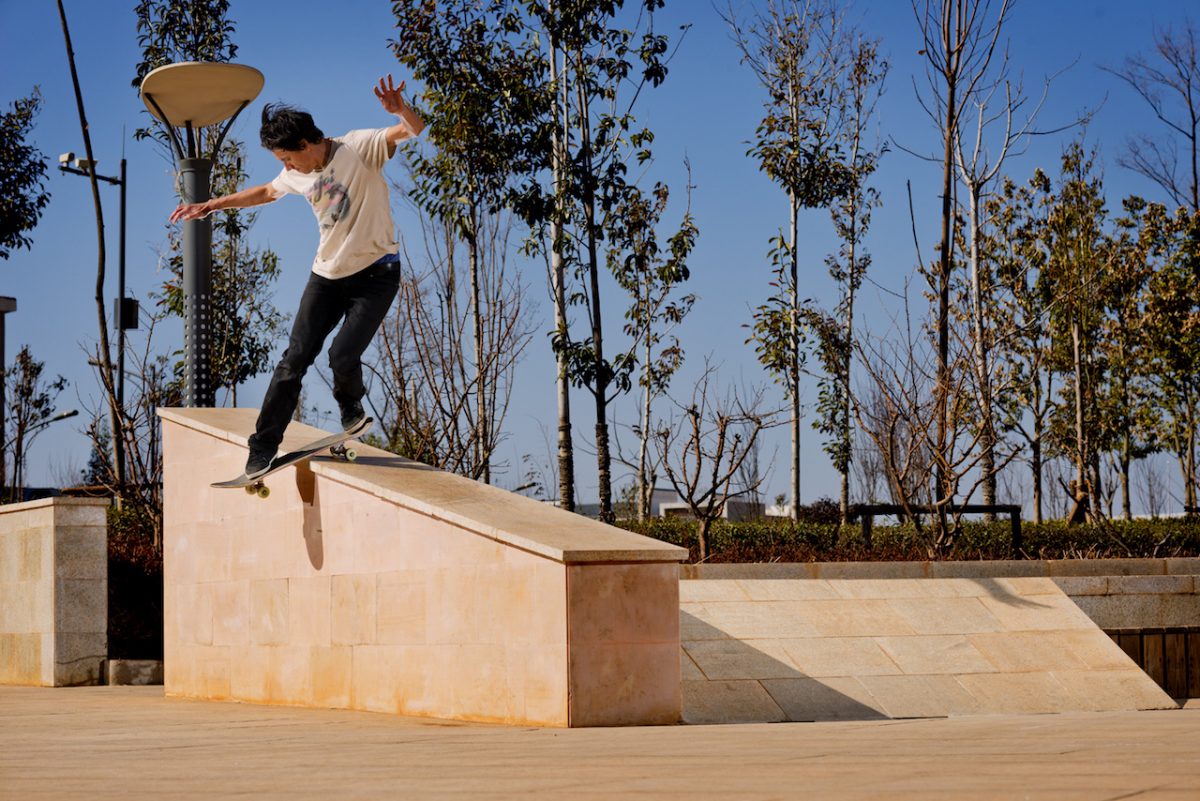 What’s in it for the riders?
The truck is basically your connection to the ground, so it has to be the most durable component in your set-up. Trucks are the one thing you transfer from one deck to the next. You’re gonna go through decks and you’re gonna go through wheels, but if you talk to people they say that once their trucks are set, they don’t want to do anything with them. So when you add technology, you still want to offer the same longevity where you can transfer it to the next deck.

Over the years, the formula for the design of a skateboard truck widely remains unchanged, though?
There is a widely accepted design for what a standard skateboard truck should look like and unless someone comes along and does something significantly different where the benefits are a significant improvement, you’re not gonna see much of a change. That takes time and effort, to really change the way people look at this component.

Any closing comments on technology in skate hardgoods?
For us it’s good to have media talk about this stuff and get it out to the public, so shops can keep having those conversations about technology. That’s been one of our challenges, getting that message to the retailers: That we have these technologies and here is why they are important. Technology was created to improve the components of a skateboard, and by putting technology in our decks we feel that we have contributed to improving and enhancing the skateboard deck. We feel that it performs better, it lasts longer – that’s what you want out of a skateboard deck. For something that gets destroyed so quickly, you want it to last as long as possible. 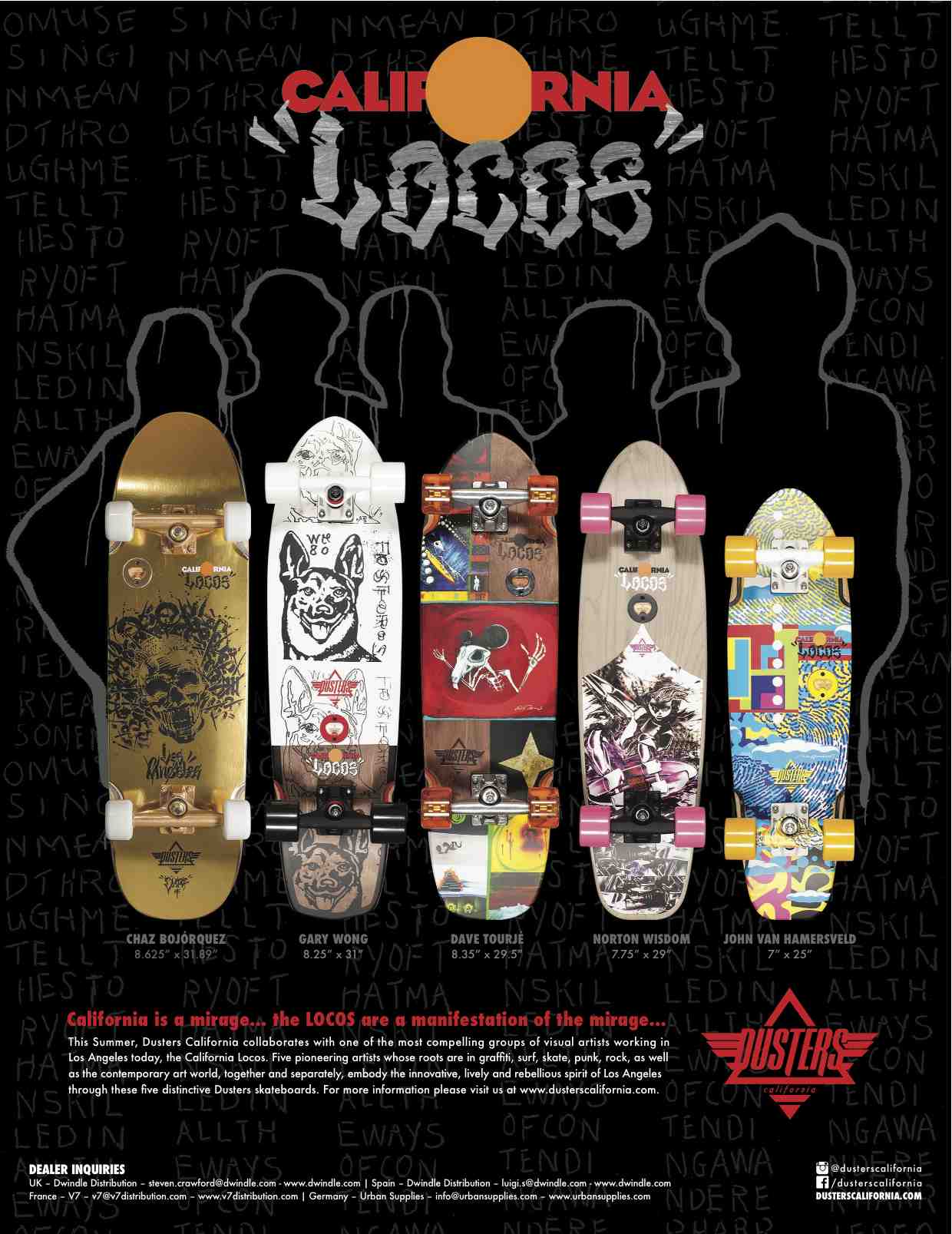