Following the announcement from Fallen Footwear on their relaunch in early February 2019, the brand is now proud to announce that they will be joining forces with one of their original team members, Chris Cole. With plans to re-launch some of Cole’s best selling items along with the launch of new signature pieces, this is exciting news for the team at Fallen. 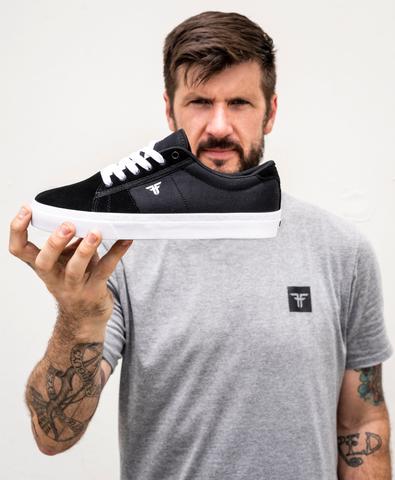 Press Release: May 1st, 2019, Oceanside, CA
We are very proud to announce that Chris Cole is back on Fallen Footwear! Professional Skateboarder Chris Cole, arguably one of the world’s best street skateboarders has returned home to Fallen, one of his original footwear sponsors for which he was pro for 8 years.
During those 8 great years, Fallen Footwear produced multiple best-selling signature products with Cole’s name including his first pro model shoe, “The Trooper” which was released in 2005. His second signature shoe “The Ripper” was released in 2007, and his third signature shoe “The Hi-Volt” was released in 2010. During that span, Fallen also released the “Cobra Hood” which became one of the best-selling apparel items of its time.
The future for Chris Cole and Fallen Footwear is bright, with the first step plans being to re-release some of his best-selling items and followed by creating new signature items that will sure to become fan favorites and best sellers.
Chris Cole Quote
Fallen has always been the underdog, blue collar, working skater’s brand. The spirit of all that Fallen did the first time around is the same spirit we want to continue to move forward with. Being a part of Fallen again makes me so happy, and I feel like the brand is a part of me. I’m proud to carry the Fallen Footwear torch once again.
Chad Foreman Quote
My history with Fallen Footwear and Chris Cole goes back almost two decades, but these next steps, the relaunch, getting some of the original guys back on the team and rebuilding the brand from the ground up has been so rewarding. Working for a brand that had such a huge impact on my early business career and being able to revisit it with a broader perspective, more experience and knowledge, and also with some of the original team riders is just special, it’s a special time. Everyone here at Two Two4 Media will stop at nothing in order to recreate Fallen in the most authentic way possible!
Ronnie Quote
We are very proud to announce that Chris is back and rising again with the Fallen. His return means an upscale in the brand identity. It is such an honor to have one of only two skaters to be awarded twice as “Skater of the Year”. Knowing him as a man who likes perfection, the future Fallen collections will have so much added value. All of the Chris Cole and Fallen fans can´t wait to see his pro models re-released and back on shop shelves and we are equally excited to make that happen!
Chris’s Sponsors
Plan B Skateboards, Thunder Trucks, Spitfire Wheels, GoPro, Stance, Bones Love Milk, Kershaw Knives, Indian Motorcycles, Cult, Bones Bearings, Fallen footwear
More About Chris Cole
http://chriscobracole.com/biography/
More About Fallen Footwear
https://fallenfootwear.us/pages/about-us
More About Two Two4 Media
https://www.twotwo4media.com

Next
International Board Shop Day