With only two weeks to go till the Red Bull Roller Coaster the start list has been announced with some new faces on the starting blocks. Last years winners will be joined by some of the best in the world to defend their titles, check out more info below. 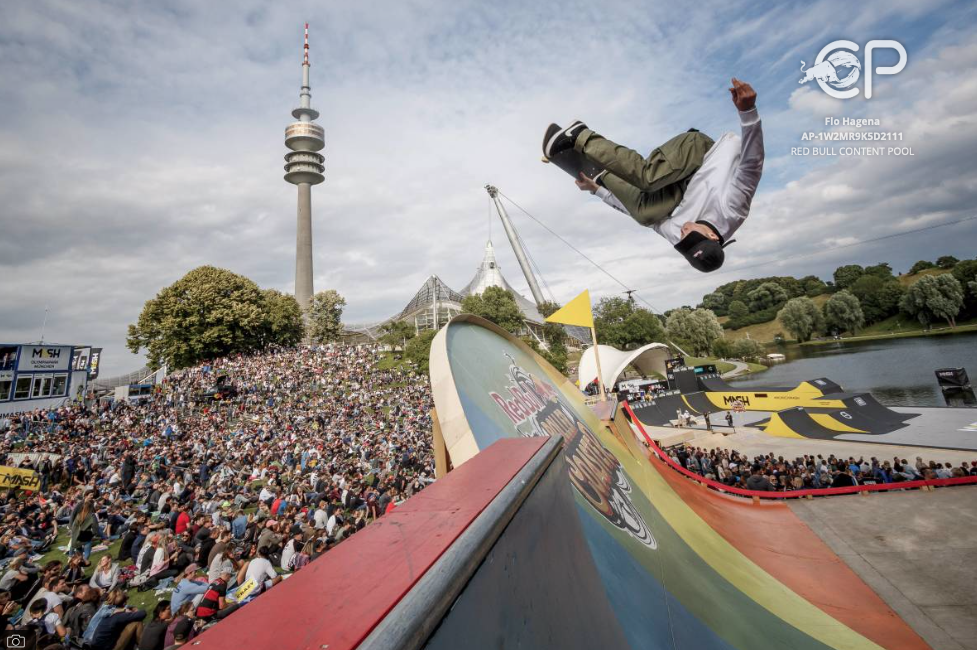 It’s less than two weeks until Red Bull Roller Coaster returns to the capital of Bavaria, once again bringing the world’s only skateboarding downhill slope-style contest to the green terraces of Munich’s Olympic Park. While staying true to the original concept that drew thousands of skateboard enthusiasts to last year’s Munich Mash and provided both spectators and athletes with intense full-throttle skateboarding and a breathtaking final, sports director and Roller Coaster mastermind Oli Bürgin and his crew have tweaked some details to make this year’s Red Bull Roller Coaster even more smooth and challenging alike. It took 60 tons of wood, almost 100 000 screws and 1 260 hours of work to bring the Red Bull Roller Coaster into existence – but on June 29th, some of the world’s best skateboarders and an amazing crowd are going to bring it to life. Expect some of last year’s veterans and many fresh faces to go all–in in the search for the most versatile skateboarder in the world!

Sure enough, reigning champ Jake Ilardi will return to Munich to defend his title. The 22-year old pro skater from Osprey, Florida, USA, has proved himself a master of all terrains, taking first place in last year’s Red Bull Roller Coaster with a final run that defied any expectation. Jake is more than hyped to return to Bavaria’s capital city for Munich Mash 2019: “I’m really looking forward to this year’s Red Bull Roller Coaster and defending my title”, he states, “it’s going to be a good time with everyone and Munich is going to be a blast as always!” Danny Leon (ESP) came in a close second with a flawless run, combined effortless style with speed and consequently took the silver medal. Having skated parks around the globe, Danny is comfortable with any kind of obstacle you throw at him as well as the streets of his hometown Madrid. As a proven veteran of last year’s Red Bull Roller Coaster, expect Danny to give Jake a run for his money in this year’s round two – just like Alex Sorgente (USA) who took place four in 2018 and proved to be a favorite of the crowd.

They will not only be joined by last year’s finalists Vincent Milou (FRA) and Fabiana Delfino (USA) but will also have to stand their ground against some hungry new entrants. Take for example Alex Midler – the 20-year-old from Los Angeles, USA, received his pro board from SOVRN Skateboards last year and is no stranger to European terrain, having participated in street contests like CPH Pro and Street League London. Another first-timer at Red Bull Roller Coaster comes from Videvano, Italy: Aref Koushesh is primarily known for elegantly and recklessly ripping transitions worldwide, but if you peep his recent video parts, you come to realize he feels just as home in the streets as in the concrete waves. Adding even more international flavor to the line-up, Gosha Konyshev from Russia has confirmed his participation as well. They are joined in the roster by Jordyn Barrett and Alana Smith, both from the US, Catherine Marquis (GER) and Kate Shengeliya from Russia, who will, among others, form the starting field for the ladies’ division of Red Bull Roller Coaster. Skateboard enthusiasts are looking forward to seeing 18 international athletes in the men’s qualifiers on June 28th and six top skateboarders in the ladies’ contest. But it does not stop here: To promote fresh local talent, a National Qualification will be held on Thursday, June 27th, granting the winner an exclusive wildcard to the main contest.

Stay tuned for the final roster to compete at Red Bull Roller Coaster 2019. For those who cannot make it to the entrance-free