Shaun Neff, founder of Neff Headwear has recently announced the launch of his Oral Hygiene company Moon. Neff and the Kardashian- Jenners previously collaborated on a promotion for Neff Headwear where Shaun and Kendall met, which has now lead to their collaboration with Kendall Jenner on Moon’s new teeth whitening pen. 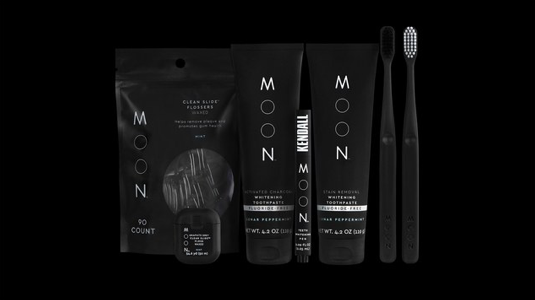 Press Releases: Whether you’ve been watching Keeping Up With the Kardashians for 16 years or you only catch Kardashian-Jenner news while strolling through Instagram, you have to admit that the family are serious entrepreneurs. Kylie Jenner, the baby of the family, has a billion-dollar makeup empire, Kim Kardashian West has her own makeup and fragrance line, Kourtney Kardashian just launched a wellness website, and Khloé Kardashian founded the popular denim brand Good American. Now, it’s Kendall Jenner’s turn. Of course, she’s been a successful model and Estée Lauder brand ambassador since she was a teenager, but aside from a clothing line with Kylie (Kendall + Kylie), she hasn’t gone outside the family business — until now. Jenner has partnered with Moon, a new oral-care brand created by Shaun Neff of Neff headwear fame.

The Moon line includes everything you need for your teeth and mouth, including toothpaste and flossers. The products are made without sulfates, parabens, and triclosan, retails from $4 to $20, and is also PETA-certified, cruelty-free, and vegan. Jenner helped create one product for the brand, the Kendall Jenner Teeth Whitening Pen. We sat down with the model and Neff to hear about how this all came together and why now was the right time to get into the oral-care business.

How do you two know each other?
Jenner: “Kendall + Kylie did a collab with Neff beanies, and I met Shaun. About a year ago, he told me about his oral beauty idea, and I was really into it. I thought it was such a cool idea because there’s not much like it out there — just the chicness and coolness of it. It spoke to me.”

Why oral care now?
Neff: “For me, the category has been the same and so bland. It has always been something on your counter that looks bad. Like fragrances, it was born on the idea of, let’s make something that looks beautiful on the shelf and complements all the amazing stuff that you have. The design is very important, but what’s inside is the most important. We’ve got a great product. We hired a best-in-class team, product developers, and a CEO that has more than 15 years in oral care. We have been working on this for almost 18 months.”

Kendall, you collaborated on the whitening pen. What do you like so much about it?
Jenner: “I’m always running around, working, flying, traveling, and stuff, so to be able to have something I can just throw in my bag was super cool and important to me. It’s not something you’re embarrassed to pull out of the bag and use. It looks nice.”

Neff: “I think it’s very unique. [Before working with Jenner], it was more of an idea of a teeth-whitening pen, and Kendall [brought the] clicking system, how it looks, the shape, and how it can go in and out of her clutch easily. Kendall being involved was a no-brainer because she is always on the go. And she picked the three main ingredients: strawberry, honeysuckle, and lavender.”

Why did you choose those ingredients?
Jenner: “I love honey — anything sweet. And strawberry is my favorite. Lavender is just calming.”

What other products do you love from the line?
Neff: “One of our favorites is the charcoal toothpaste. Charcoal is one thing people love, but it makes your sink a mess. Ours actually foams to a very light grey and makes no marks [on your sink].”

Jenner: “I was lucky to get the first round and have been using it for a couple of months. I love it. People are just getting into the charcoal thing, but it just makes such a mess. But if you throw it into a toothpaste, it makes it a lot easier to use and still functions well.”

What’s next from the brand?
Neff: “There’s a lot coming. We’ve got a lot of disruptive, unique, oral-hygiene products coming down the pipeline. Kendall has other signature SKUs in other products that will be coming out over the years.”

Jenner: “It’s fun to do things not a lot of people are doing.”

Neff: “Oral care has never been looked at as rad or cool, and Kendall is both of those things. It was like, let’s work with her and put this thing on the map. And then when you combine killer product, killer packaging, killer goop inside, with someone like her and all the amazing people we’re going to work with in the future, I think we’ve got something special.”

You can shop Moon now on moonoralcare.com before it rolls out in Ulta stores.