The decrease in holidays abroad and the rise in stayations due to COVID has forced the cancellation of the Eurostar Ski Train. The train from London direct to French ski resorts has run twice weekly since 1997, popular for being far quicker and less polluting than taking to the air. In response, Protect Our Winters has teamed up with Snowcarbon, Ski Flight Free and SaveOurSnow for a campaign to keep the train running- #SaveTheSkiTrain. 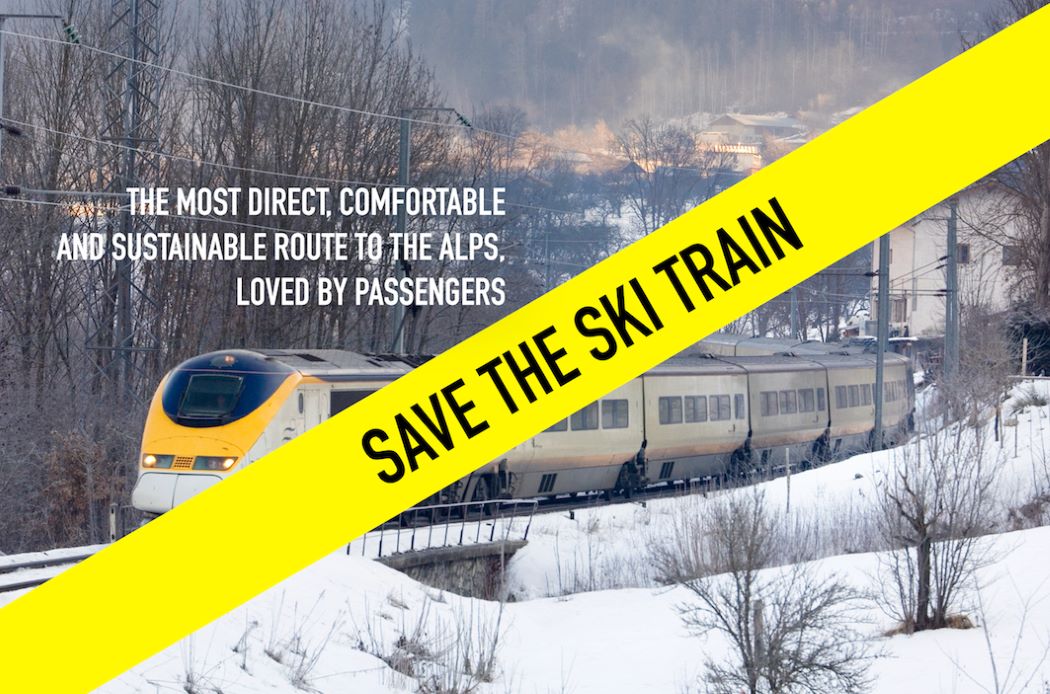 Save The Ski Train

The Ski Train was the best way to get to the alps. Please sign the petition to bring it back!

Read on for the details of the new campaign…

It’s fast, comfortable, and far more sustainable than flying or driving from the UK to the Alps. But it’s cancelled.

To the massive disappointment of skiers and the ski industry, Eurostar will not run its iconic Ski Train this winter. POW’s Save The Ski Train campaign has been launched in response to persuade Eurostar to reinstate this unique service during this winter.

Since 1997, the train has run twice weekly from London and Ashford to the popular Tarentaise region of the French Alps, dropping skiers at Moutiers, Aime la Plagne and Bourg St Maurice stations, a short hop by bus or taxi from 16 major ski resorts, including Méribel, Courchevel, La Plagne, Les Arcs, Tignes and Val d’Isère.

With 750 skiers on each train, the Friday overnight and Saturday daytime services carry a total of 24,000 holidaymakers every winter. The daytime train makes the 830km trip from London to Bourg St Maurice in just over eight hours and is frequently faster than flying when compared door to door — with an estimated 80% reduction in CO2 emissions. Travelling on the overnight train each way gives skiers two extra days on the slopes.

Eurostar told its customers: “This is a decision we’ve made with a great deal of sadness. It’s been an absolute pleasure to take thousands of travellers direct from St Pancras to the Alps over the years. But in the wake of the Coronavirus and a challenging travel market, we’ve had to make some changes to our services, focusing on our main routes with the highest demand.”

Daniel Elkan, founder of independent rail-ski guide Snowcarbon, said: “Skiers and snowboarders are gutted by the loss of this hugely popular train. Why would you spend an entire day navigating airport queues, sitting on cramped, gas-guzzling flights and on tedious, transfers when you could be smoothly, safely and scenically gliding by train to your ski resort? It’s the most magical start to a ski holiday. This cancellation is a damaging step backwards by Eurostar. While there are indirect train routes to the French Alps, these can’t compensate for the loss of the direct Ski Train.”

Transport is by far the biggest environmental factor of a ski holiday. A 2010 study by Alpine-sustainability charity Mountain Riders found that 57% of the entire carbon footprint of a typical French ski resort was solely the result of transport to the resort.

Dominic Winter, Carbon Literacy Manager at environmental charity Protect Our Winters UK, said: “The future of snowsports and the wider planet depend on us switching rapidly to more sustainable modes of transport. The loss of the Ski Train would be a huge blow to progress on climate change in outdoor sports.”

The Save The Ski Train campaign, launched by Snowcarbon, Protect Our Winters, Ski Flight Free and SaveOurSnow, will create a voice for skiers, snowboarders and the ski industry together to try to persuade Eurostar to put the Ski Train back on. “Eurostar’s decision is premature and seemingly made without any consultation of skiers or the ski industry,” says Elkan.  “There’s still time to think again.”

Snowcarbon is an independent website to help skiers and snowboarders travel to the Alps by train. (snowcarbon.co.uk)

SaveOurSnow is an information service on initiatives to fight climate change in ski travel and maintains a directory of melting glaciers worldwide. (saveoursnow.com)