Following extensive preparations regarding venues and health & safety precautions, WSL has confirmed 4 events for the Australian leg of the Championship Tour. The events are set to take place throughout April and May, 3 events of which Rip Curl have naming rights for. WSL has also announced that former CT competitor Jessi Miley-Dyer, has been made Senior Vice President of Tours and Head of Competition, which involves overseeing all WSL tours.

The WSL will concentrate its Australian CT events in New South Wales and Western Australia, following approvals for pre-approved quarantine bubbles. The WSL could not achieve these bubbles in Victoria and Queensland in the short amount of time it needed to do so but could in Western Australia, hence the two events in each state given the charter of international athletes lands in NSW.

“The WSL is truly excited to have the CT coming back to Australia in 2021 with the addition of an extra event,” said WSL APAC General Manager, Andrew Stark. “This year, the Aussie CT leg is looking very different to what we’re used to due to COVID-19, with the addition of three new stops. Although it’s genuinely disappointing to miss locations like Bells Beach and Snapper Rocks this year, we are stoked to add Newcastle, North Narrabeen and Rottnest Island to the schedule. We would like to sincerely thank all of our partners for their patience, understanding and support during this extremely difficult time. The WSL can’t wait to get the tour back underway and run epic and safe events for our athletes, fans and partners in Australia.”

Last week, the WSL announced the agreement with the New South Wales Government that will see all international competitors board a chartered flight in Los Angeles that will land in Sydney. Once in Australia, all travelling athletes and support staff will undergo the mandatory 14-day hotel quarantine and must receive a medical clearance from public health officials before entering the general community and preparing for competition in Newcastle. The Government is not funding the quarantine.

The WSL will implement a robust and thorough COVID-19 health and safety plan for each event during the Australian leg of the CT in accordance with federal and state guidance. The WSL’s health and safety plan include physical distancing measures, temperature checks, enhanced high-touch cleaning at the event site, contact tracing procedures, sanitizer stations throughout the event site, and minimal personnel on-site.

Joining Margaret River on the elite CT will be three new CT stops in New South Wales and Western Australia. The opening stop of the Australian leg will see the Championship Tour head to the pro surfing hub of Merewether Beach in Newcastle continuing over 35 years of professional surfing history in this iconic Australian city.

Following Newcastle, the CT will head south to the Northern Beaches of Sydney to North Narrabeen. Similarly to Newcastle, North Narrabeen has a rich surfing lineage producing some of surfing’s biggest names. Home to legends such as Simon Anderson, Nathan Hedge, Laura Enever and Damien Hardman to name a few, the high-performance lefts of North Narra have hosted dozens of professional events over the last four decades with the Rip Curl Narrabeen Classic pres. by Corona, CT being the first event since the World Junior Championships over a decade ago.

“Narrabeen is one of Australia’s most iconic surfing beaches and we want to make sure the community can make the most of the recreational, tourism and economic benefits that surfing provides,” said NSW Deputy Premier, John Barilaro. “The impacts of COVID-19 hit the Northern Beaches hard, with forced lockdowns over Christmas last year, and our support for this event will stimulate the local economy and showcase Narrabeen as a world-class surfing and tourism destination.”

“This highly coveted Championship Tour will bring much-needed tourism dollars into the local shops, eateries, and accommodation here in Narrabeen and surrounds, helping to rebuild our economy after a very tough year for many local businesses,” said Rob Stokes, Member for Pittwater. “I’m thrilled to see this spectacular event coming to our shores, boosting our profile on the global stage and encouraging a sense of pride in our community.

“This is a huge opportunity to showcase the Northern Beaches on the world stage for eleven days,” said Northern Beaches Mayor Michael Regan. “The WSL is a perfect fit with the lifestyle we are very proud of in our coastal community. This will bring much-needed economic activity and jobs to local businesses.”

“We haven’t had a combined world tour event on the Northern Beaches for over 20 years, it is going to be great for surfers, particularly grommets, to see the best surfers in the world competing at Narrabeen, the most consistent wave in Sydney,” said local legend and two-time World Champion Damien Hardman. “After the impact of the Northern Beaches being forced into a COVID lockdown over the busy Xmas period this event could not come at a better time for many businesses.”

The third event of the Australian leg is a more familiar one for competitors and surf fans alike, Margaret River, where competition returns to the rugged and raw waters of South West Western Australia. Competitors will be tested as always with one of the most diverse events seeing Main Break and The Box coming into play across the event window.

“Boost Mobile is on Australia’s Biggest Mobile Network and has been a supporter of Athletes and Professional surfing at various levels over the past 20 years,” said Boost Mobile General Manager Jason Haynes. “We are proud to continue our partnership as the official telco of WSL and as naming rights to the Boost Mobile Margaret River Pro in WA. The Margaret River area  produces some world-class waves and WSL produces an exceptional broadcast,  so despite potential limited on-site spectators the WSL team will put the fans in the perfect seat to watch all the competition, drama and action unfold.”

The pristine nature reserve of Rottnest Island will host the fourth stop of the Australian Championship Tour leg. The island is offshore from Western Australia’s capital, Perth, and its breaks are some of the most consistent in the state. Strickland Bay, where the event will take place, is predominantly a left and is considered one of the best waves in south-west Western Australia.

“This is a fantastic result for Western Australia and demonstrates how great the surfing opportunities are throughout our State,” said WA Tourism Minister Paul Papalia. “International and national viewers will be able to see how pristine the marine environment is around Rottnest Island and get a taste of what makes this island so special. The World Surf League competitors will also be able to meet the world’s happiest animal, the quokka, and experience firsthand Rottnest’s unique environment. The McGowan Government is very pleased to be able to support this new leg on the Australian calendar following our securing of the Margaret River Pro until at least 2024.”

“This one-off event represents another real opportunity for a WA female and male surfer to compete at the highest level possible in Surfing,” said Surfing WA CEO Mark Lane. “Bronte Macaulay and Jack Robinson are both examples of WA surfers who have been provided with a similar opportunity via Wild Card positions in the past – and have successfully taken the step to legitimately earn themself a full-time position on the World Championship Tour.”

Although Rottnest Island will remain open for visitors while hosting the event, spectators won’t be permitted at Strickland Bay because it is a broadcast-only event. 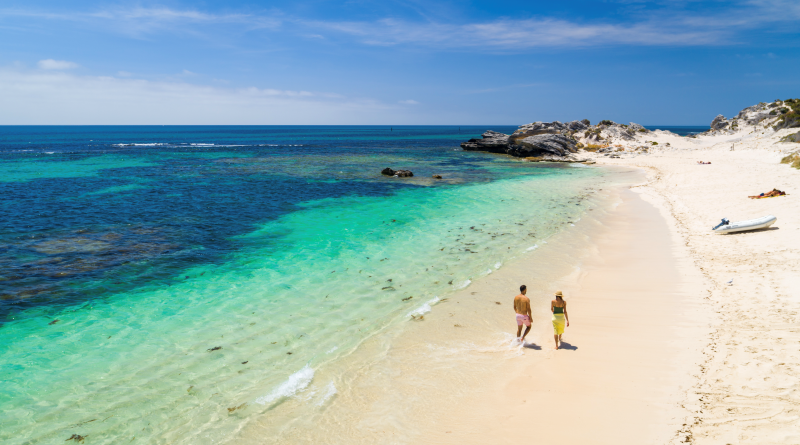 The beautiful Rottnest Island will play host to a CT event for the first time in history. Credit Tourism WA

Iconic surf brand Rip Curl has come on board for three of the four events as the naming rights sponsor in Newcastle, North Narrabeen, and Rottnest Island continuing their long and generous support of professional surfing.

“When the WSL told us they had three alternative World Tour events to sponsor after the Rip Curl Pro at Bells Beach got cancelled due to Covid 19 we did what comes natural and got involved,” said Rip Curl Founder and pro surfing legend Doug ‘Claw’ Warbrick. The former WSL judge, competitor and Board Member sees it as a great opportunity to keep pro surfing rolling. “Newcastle, Narrabeen and Margaret River have long-term pro surfing histories; and Rottnest Island gave us the chance to bring back the Rip Curl Search, which hasn’t run since twice world champion Gabe Medina won in San Francisco a decade ago. The Cup, The Classic, The Masters and The Search. That’s a great Quaddie to go for! Congratulations to WSL. They are working very hard to keep the Tour alive and we are privileged to be on board. We love watching the world’s best surfers ripping in great waves.”

The WSL also confirmed the unfortunate cancellation of the Corona Open Gold Coast presented by Billabong at Snapper Rocks. The difficult decision to cancel the event in 2021 is due to the ongoing issues due to the COVID-19 pandemic.  The extremely difficult decision to cancel this event was based on the genuine possibility of multiple risks attached to sudden public health measures in reaction to COVID-19 such as lockdowns, state border restrictions, and event cancellations. Without a pre-approved bubble to enter the state amid a state border closure the risk to the event and to WSL was too great to bear.

Despite the cancellation, special thanks to our longtime partners at Corona, who we are thrilled to announce will be coming on as the Presenting partner of all four Australia CT stops. The Corona Lay Days social video series will continue at all four locations, giving our fans a behind-the-scenes look at what our CT athletes are doing when the competition is called off, and Corona Lay Days are on. 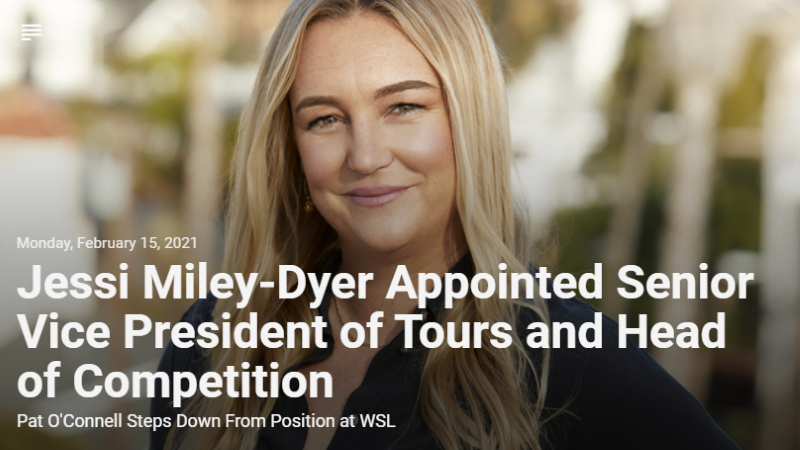 Jessi Miley-Dyer, former CT competitor, has been appointed Senior Vice President of Tours and Head of Competition. Miley-Dyer previously served as Vice President of Tours and Competition and will succeed Pat O’Connell. Miley-Dyer will oversee all WSL Tours, including the Championship Tour, Challenger Series, Qualifying Series, Pro Junior Series, Big Wave, Longboard, and specialty events and series. O’Connell decided to transition out of his role to pursue new opportunities. Miley-Dyer will officially begin her new role on March 1 and be based out of the WSL Headquarters in Los Angeles, California.

“Surfing has been a passion since I was very young, from competing professionally to now leading an incredible team to shape surfing’s future,” said Miley-Dyer. “I feel very fortunate to have made a career doing something that I love, and something that has given me so much after retiring from professional competition.  I am excited to lead the sport into a new era.”

Due to COVID-19, the Australian CT events will run based on state border closures, strictly adhering to federal and state government guidelines and restrictions. All tour stops and dates subject to change due to applicable COVID-19 related restrictions, including global travel restrictions. 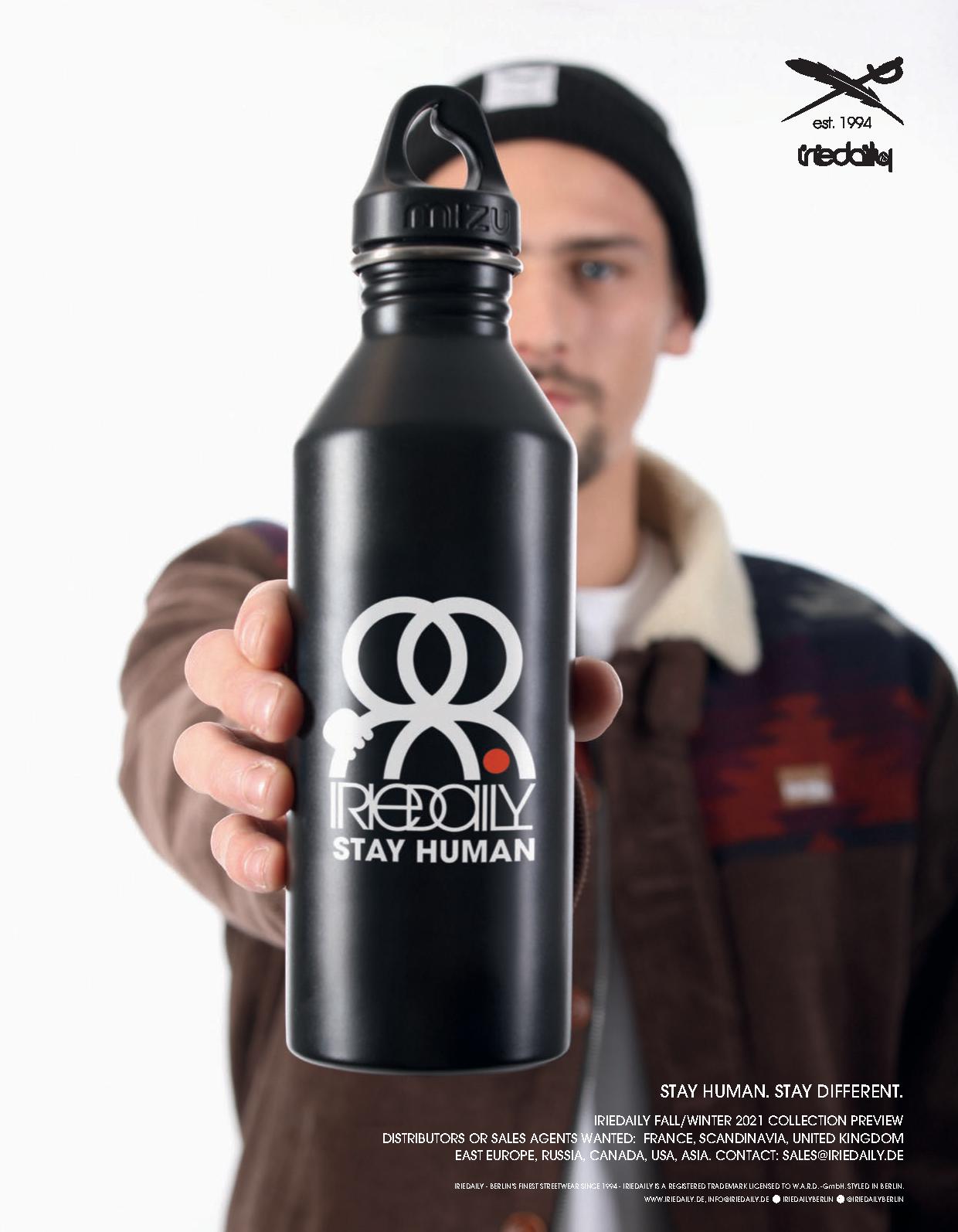