Nidec Industrial Solutions is partnering with American Wave Machines by providing the PerfectSwell®control system to make it possible to experience exciting, safe and reliable surfing indoors with artificial wave.

Press Release: Nidec Industrial Solutions (NIS), leader in the Nidec Group’s industrial sector, is collaborating with American Wave Machines, as the sole supplier, in the creation of PerfectSwell®systems, that generate artificial waves in pools, fulfilling the dreams of professional and amateur surfers to be able to practice this adventurous sport even when it isn’t possible to do so in the sea.

The largest system of this type has been created at the BSR Surf Resort, the new Texas park (near to Waco) due to open on June 16, that has the largest pool built by the company to date capable of generating artificial waves.

Built using innovative inverters and NIS control systems, that ensure its safe and reliable operation, the system can generate waves at varying frequency as little as 4 seconds with multiple waves breaking at once in the pool, which will allow surfers to have the same exciting experience as though they were in the sea. It will, in fact, be capable of generating an infinite variety of programmable waves, including point break-type peeling waves, left and right, adjustable peaks (single, double, triple…), reef breaks, beach breaks, “customs”, a barrel into a peak close-out, and so on, all without the need for special bottom contours.

The reactions of the first surfers invited to test out the facility have been enthusiastic, as evidenced by the rapid way in which the word has spread across social networks and throughout the sector. “I got to surf and get barreled indoors,” declared the famous surfer Rob Kelly, “and it was definitely an awesome and unique experience. As a surfer, PerfectSwell® is literally a dream come true. I couldn’t believe the quality, quantity, and variety of waves the system was able to produce. I surfed it with 4 of my friends and we took turns surfing perfect waves. My mind was blown that a session like that could be produced in a pool. Aside from being incredibly fun to surf, I truly believe PerfectSwell is the ultimate training tool that never existed in surfing until now. Being able to surf a wave of that quality over and over again is going to push the progression of the sport to heights we didn’t know would be possible.” 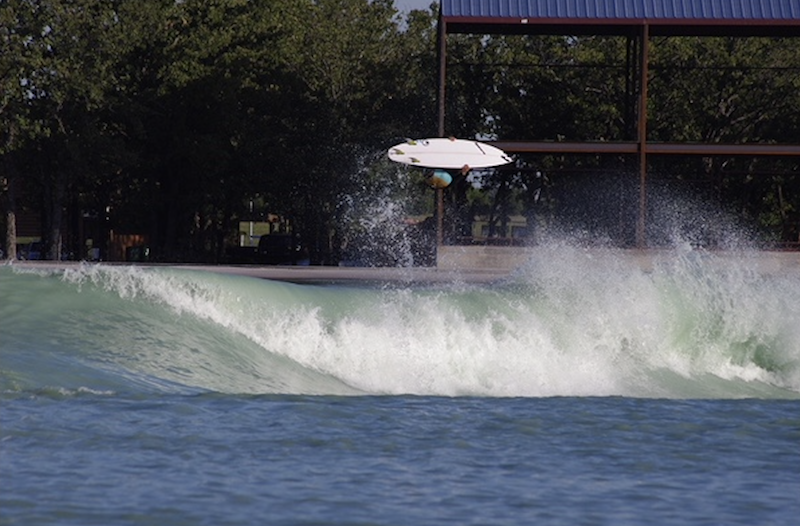 “Strengthened by our experience in installing solutions for controlling the power and for electrical operation, our team of engineers has developed an ad hoc system that will meet in full the technical needs of the PerfectSwell facility in Texas, and that it will be possible to replicate in other parks and cities,” commented Kaila Haines, Marketing & PR Director of Nidec Industrial Solutions.

“We are especially proud to have contributed, together with such a strongly dynamic and innovative company as American Wave Machines, to an ambitious project to create a pool where surfers can always train, even when there is no wind. The facility in Texas is the fourth that we have worked on together and is without doubt the largest. With the recent announcement that surfing is to become an Olympic sport at the Tokyo 2020 games, we think that the demand for artificial wave pools will continue to grow significantly and will constitute a market with interesting opportunities for expansion.”

With the aim of continuing to supply the market with more high performance and innovative solutions, American Wave Machines (AWM) and Nidec Industrial Solutions have just signed a memorandum of intent that foresees that the collaboration begun between the two companies to develop the best in class technology for out of ocean surfing venues will also continue in future. NIS will provide its know-how in automation and power conversion systems, whilst American Wave Machine will integrate its skills into the design and implementation of proprietary technologies for the creation of advanced artificial waves and the development of  surfing venues. Together they will pursue the goal of spreading surfing around the world, both in sporting as well as recreational facilities.

Nidec Industrial Solutions (NIS), the commercial platform of the Nidec group, offers complete electrical systems and brings together the products and services of Nidec ASI, Avtron Industrial Automation, Nidec Industrial Automation and Motortecnica. It offers customised solutions throughout the world for a wide range of industrial applications. Its reference markets are the petrochemical, traditional and renewable energy, steel, naval and industrial automation markets. The multinational is specialised in heavy duty applications in which high power and high performance are key: electric motors and generators up to 65 MW of power (87,000 HP); power electronics inverters and converters; automation and software for industrial processes; retrofitting of power plants and hydroelectric generators; integrated systems for the production of electrical energy from renewable sources and their stabilisation in connecting to the national grid.