Adding to the hype ahead of the release of CJ Mirra’s epic soundtrack album ‘Translate’, CJ has dropped the single ‘Sans Raison’, featuring the vocals of singer/surfer Lee-Ann Curren.

“Do it right now, don’t over think, without reason.” The words of renowned French surfer / musician Lee-Ann Curren wash over you like a mantra for the moment in Sans Raison, the latest release from CJ Mirra whose hotly anticipated album Translate is out this Autumn. 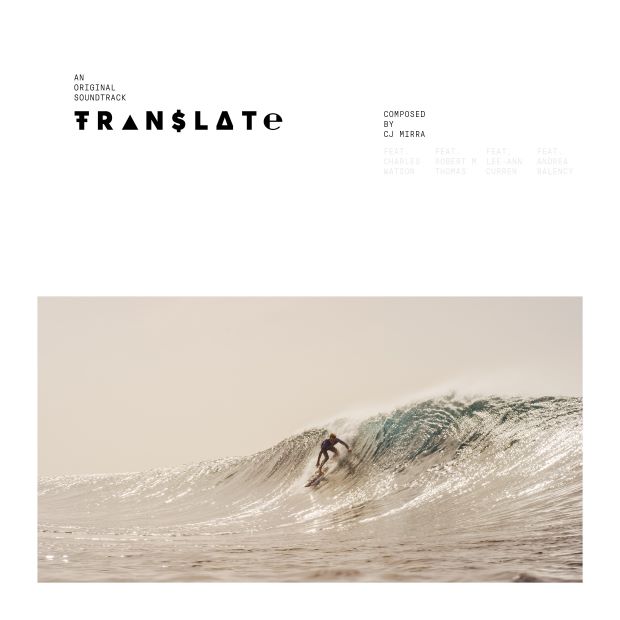 Translate is the official soundtrack to the acclaimed audio-visual freesurfing experiment and movie of the same name, the latest collaboration between celebrated composer CJ Mirra and multi-award winning filmmaker Chris McClean. An ode to the raging North Atlantic in all its guises, the album unites ethereal soundscapes and orchestral movements with sublime electronic excursions, manipulated samples and heavy, lo-fi moments transporting the listener on an immersive journey across the continent, taking in the coastlines of France, Spain, Ireland, England, Scotland and beyond. “We set out to make a soundtrack rather than a score. This gave us freedom to mirror the changes in the locations, the waves and the surfers, imbuing the music with the tastes, textures and sonics to reflect the landscapes and shifting oceans, capturing the pan-European scope of the film,” explains CJ Mirra of the project that has confirmed his status as ‘the sound of cold water surfing’.

“CJ suggested that I could sing in French on Sans Raison,” explains Lee-Ann of the collaboration which has seen the pair work together across live performance and in the studio. “I played the track really loud and kind of improvised, the words that came out were, “Do it right now don’t over think, without reason”. I overlayed three takes where I’m improvising on that subject and the result was kind of cool, CJ finished mixing it with his signature effects.”

“We recorded with Lee-Ann at Abbey Road,” explains CJ Mirra.  “She has the coolest voice, her layered melody and French language vocal is two minutes of high-energy, beat-based, psych-pop with distorted bass lines and spiralling, fuzzy guitars. We did a lot of sampling off improvisations where you take an element from one place and apply it to a new environment. With Sans Raison we sampled the previous track To Éiri and that became the building block of a brand new piece, reflecting the nomadic lifestyle of surfers.”

You can watch the video here:

The video for Sans Raison is produced by filmmaker Rob Thorogood. “We layered and transformed sections of Chris McClean’s original film to create something that felt immersive, while CJ and Lee-Ann captured their own footage – I wanted the final piece to be a patchwork of the different elements that went into making Translate and have the feeling of an artist’s sketchbook”

CJ Mirra is the alias of recording artist, composer and sound designer John Sampson. Translate is the latest collaboration in a unique partnership with filmmaker Chris McClean together they have worked on some 20 film projects exploring the bounds of the cinematic surf-sphere.  “The idea for Translate came together as the whole Brexit nightmare unfolded… a love letter to Europe,” explains Chris McClean. “I never believed it would happen, still can’t. Nowhere in the world can you cross so many borders freely and experience so many languages and cultures in such a small area, the initial idea was to celebrate that.”

The title track was released in August:

Translate the album is released on The State51 Conspiracy 27th November 2020 HERE available digitally and as ltd edition vinyl. Translate the Live tour will resume soon

Next
Unify Brand Partnerships Is New UK Distributor Of Rumpl