Following its successful launch last year WinterPro returns to La Rosiere with a bigger event. Organised by Act Media the show replaced the Rock On Snow Pro that was held annually in La Clusaz. The La Rosière resort, which is renowned for its snowfall, is ideally located in the middle of Haute-Tarentaise, just above Bourg Saint Maurice and offers a 2,000m vertical drop (850m – 2850m). It’s part of the San Bernardo area with 170 km of slopes distributed between La Rosière in France and La Thuile in Italy. Like last year this will be the first on snow demo of the year, with retailers meeting up to test brand’s 2023/24 range of snowboard products for the first time.

WinterPro will be based like last year on three sites right next to the slopes. The 700 sq metre test village containing all the exhibiting hardgoods brands is located in front of the departure point of the Roches Noires chairlift, 30m from the car park. Next to this, the 200 sq metre Salle Jean Arpin reception hall will be occupied by exhibiting accessory and textile brands and will also be the location of the receptions, breakfasts and conferences and is open from 7.30am to 7pm. The test village will be open from 8am to 4pm everyday with the Roches Brunes chairlift exclusively for WinterPro participants for the first hour of each day. And on top of the resort’s terrain there will be a freestyle area built between the Antigel restaurant and the snow front (table, hip, rail, etc.).  After the slopes close there will be DJ set & parties on Sunday and Monday nights and on Sunday at 4:30pm a Volcom apéro and film projection and on Monday at 4:30pm a Vans apéro and film projection.

In the evenings the Le Boréal restaurant will be the place to be. Safety Shred Days will be held during the event with 25 pro riders invited by Victor Daviet and on Sunday Victor will hold the Atypic Banked Slalom Contest.

The event is now open to distributors and stores from all over Europe so expect an increase in overseas retailer attendance. There are regular shuttle buses between La Rosiere and the Bourg Saint Maurice station which is served by the TGV High Speed Trains direct to Paris, Marseille and Geneva. Nearest airports are Chambery, Lyons, Grenoble and Geneva. Looking forward to seeing you there for the snowboard trade season opener. 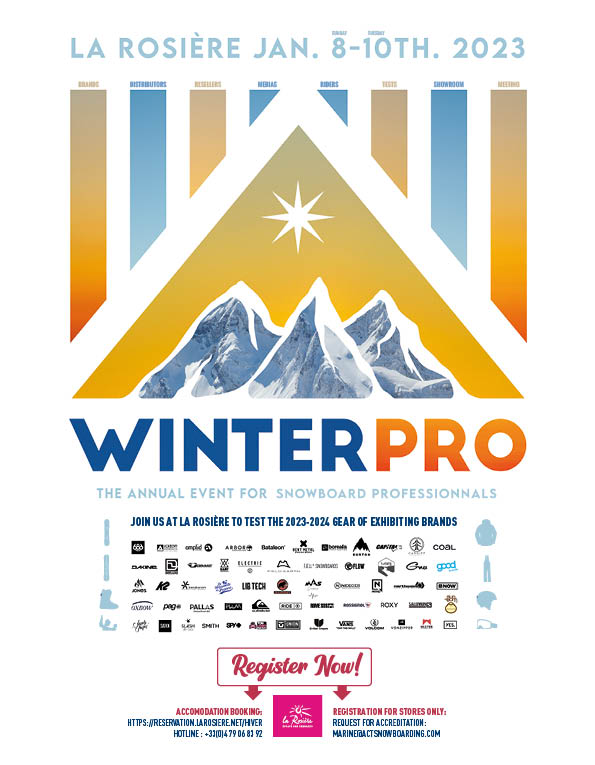