Nitro Snowboards are ‘stepping’ into a partnership with Burton to create boots that are compatible with Burton’s Step On system. From 2022/2023, Nitro will be introducing 2 Step On compatible boots to the market, so we got ahead of the game and interviewed Tommy Delago (President, Nitro Snowboards) & Christopher Fidler (V.P. Global Merchandising, Burton Snowboards) to learn about the when’s, why’s and how’s behind the new partnership.

Please could we have some details on the Nitro and Burton Step On® partnership?

Tommy Delago (TD)/ Christopher Fidler (CF): We are excited to announce that Nitro and Burton have entered a licensing partnership with Burton’s Step On® system. Starting in 2022/23, Nitro will be offering two Step On® compatible boot models, the men’s Profile TLS Step On® and the Women’s Cave TLS Step On®. These two models will add fit and lacing variety to the existing offering of Step On® compatible boots. And to support this offering, Burton will sell Step On® bindings to Nitro retailers, according to the boot quantities ordered, to make sure shops have the complete system available. 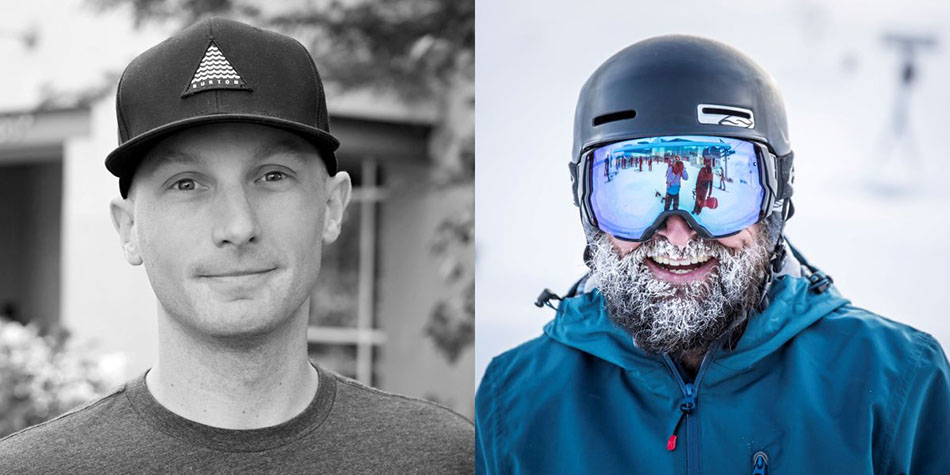 Why did you make this move?
TD: At Nitro, we have developed and sold several mechanical binding systems and compatible boots over the past 3 decades. While we were always striving for maximum performance and comfort for the rider, we also learned that too many different systems on the market can lead to confusion and unwanted stock at retailers, rather than advancing our sport. This is why we have decided that Nitro will not develop another platform, but rather team up with an existing one to provide more choices to the rider and make handling easier for the retailer. We believe this is the best way towards getting more people stoked on snowboarding and keeping them riding. We consciously stand back in trying to put out a ‘better’ system and opt for focusing on what we’re known for – superior boot fit.

CF: Creating a mechanical boot and binding interface is not new for the industry or for Burton, but when our innovation team began working on Step On® and was able to get the ride, performance, and the look and feel without any compromises from a traditional strap system, we knew that Step On® could be more than just a Burton technology. Early on we saw an opportunity to partner with like-minded brands to create an industry-wide technology platform that can elevate what is possible in a boot and binding setup. Nitro was a perfect fit as they share Burton’s passion for innovation and growing snowboarding as a sport. By partnering with Nitro, they are able to bring their signature boot performance and feel to Step On® and elevate the Step On® boot options in the marketplace. 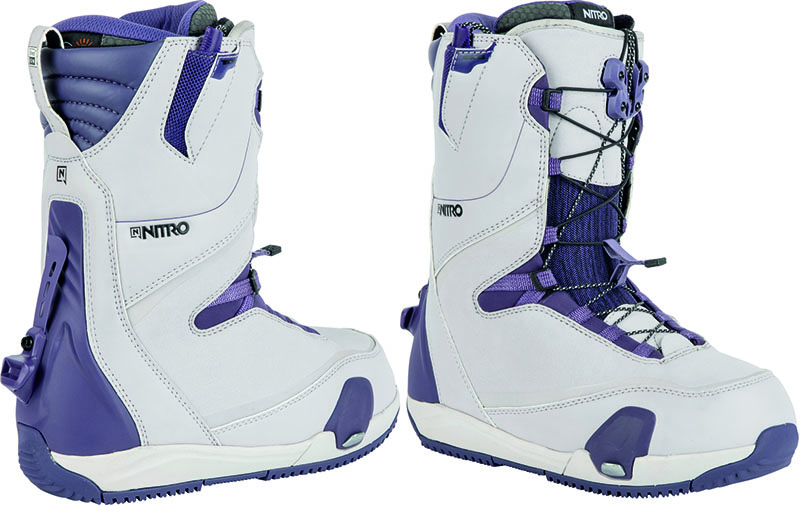 How long has the process taken and how much R&D bandwidth did you have to give to it?
TD: Of course, we have thoroughly tested Step On® since it first appeared on the market. As riders and engineers, we always thought about how a Nitro boot for this platform could look and which challenges and opportunities this would present. We started serious R&D on the boots during the spring of 2020, while discussing feasibility of the project and a possible contract at the same time. Having successfully built and sold boots for mechanical bindings before helped to expedite the process. But of course, the Burton R&D team was very helpful, especially when developing the interface itself.

CF: Winter 2022/2023 will be Burton’s sixth year of producing Step On® boots and from the inception we have been elevating and evolving the manufacturing process. Building a Step On boot is substantially more complex than a traditional snowboard boot, but we have refined a very precise process at this point. This allowed Nitro to really focus their R&D efforts towards ensuring that their design, fit and function could be achieved with Step On construction. Given Nitro’s background, this was a smooth process and was something that we were able to do together relatively quickly, and the resulting boots speak for themselves.

Talk to us about working with a major competitor to grow market share…
TD: It’s interesting that between management, designers, and engineers, you are loosely in contact with other brands anyway. We share the same passion for innovation in our sport and face the same challenges with suppliers, materials, and cost. There is a mutual respect for everyone’s achievements and contribution to snowboarding, especially with brands as focused on riding as ours. The process was very smooth since both parties really had the same goal: to make great product. As part of the partnership, we are working directly with Burton’s factory to build Nitro Step On® boots which allows our boots to share Burton’s Step On processes, parts, quality, and compatibility. But from the beginning we wanted to make sure to stay true to Nitro’s boot construction philosophy, function and fit. So, while the Burton R&D crew was instrumental in guaranteeing 100% compatibility to the Step On® interface, we focused on our fit and function by introducing our own lasts, materials, and construction techniques, so every Nitro Step On® boot will stay true to what you would expect from a Nitro boot.

CF: We all have a collective interest and responsibility to bring more energy, product evolution and participation to snowboarding. With Step On we can partner to help drive industry-wide momentum, as well as retain what differentiates our brands in the eyes of our consumers. Partnering with another brand can be a tricky endeavour as you work to sort through all of the details, but to echo Tommy’s point we were both starting this partnership with similar fundamental beliefs. This helped create that mutual trust and has created a strong partnership from the beginning. 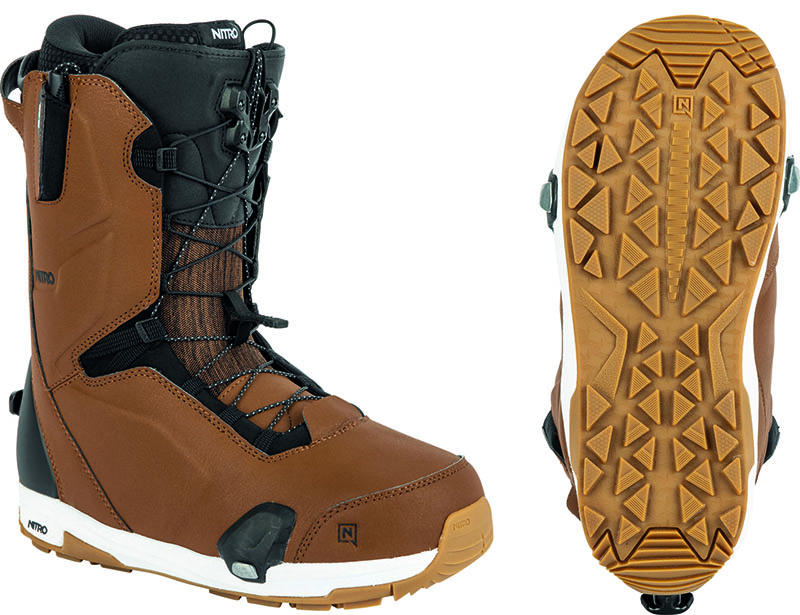 Which consumers do you see being attracted to the Step On®?
TD: Once again, we want to avoid making the same mistakes in the past like saying, ‘Step On® is for this or that kind of rider’ or ‘this is the future’. Snowboarding is a lot about freedom of choice, and we really want to add to the choices available to the rider. Whether it is about convenience, about board feel, or simply about being faster in your binding to beat your buddies to the first pow track – you decide.

Any exclusives with Burton? Colourways, etc?
???  Not much to share here.

How are you marketing the Nitro Step On®?
TD/CF: We are starting with a solid presence at the upcoming dealer demos and will continue this into autumn, alongside our end consumer marketing initiatives that are currently under development… but you will have to wait for that.

Pictured in the header is Nitro’s President Tommy Delago. 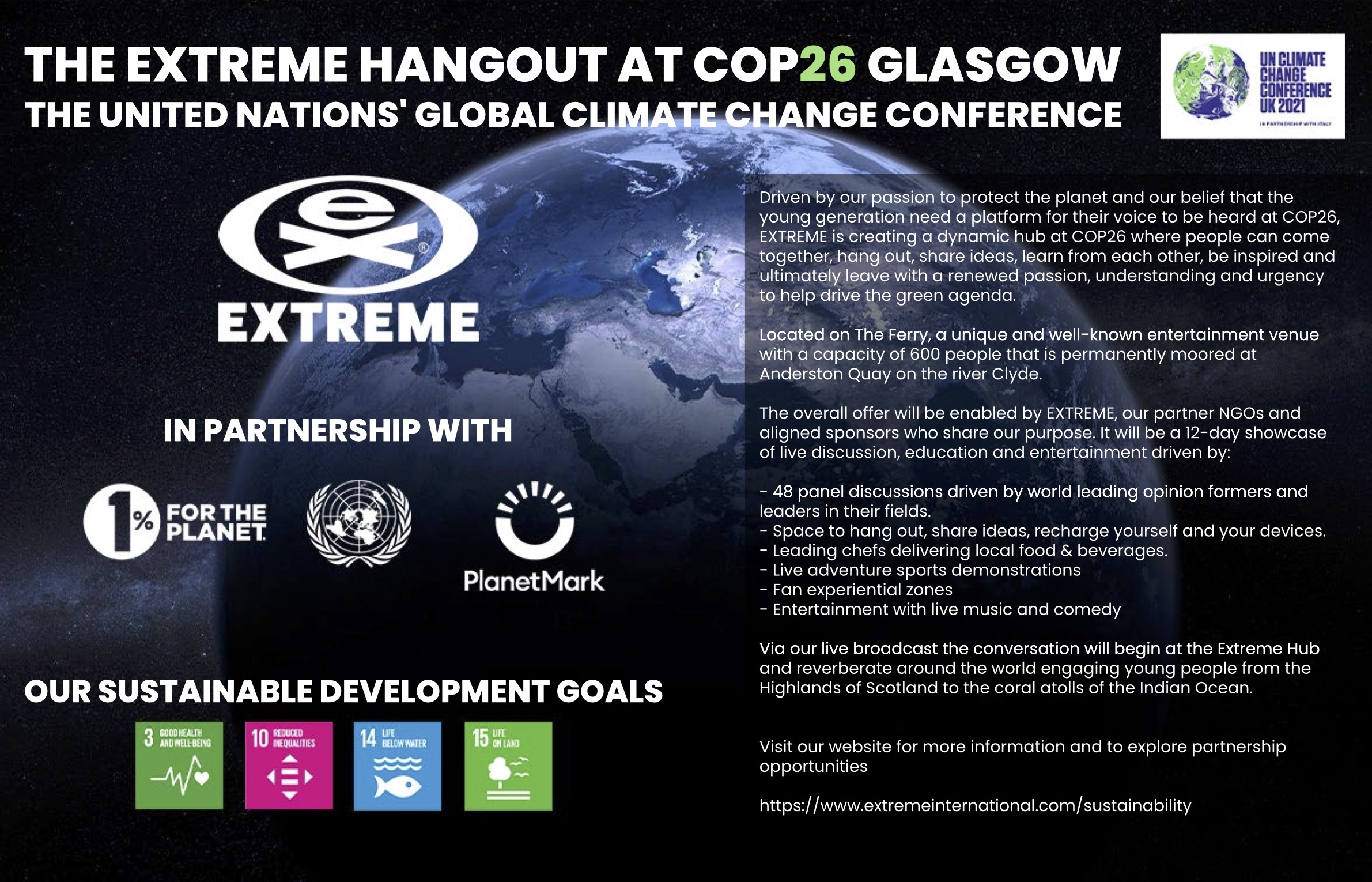