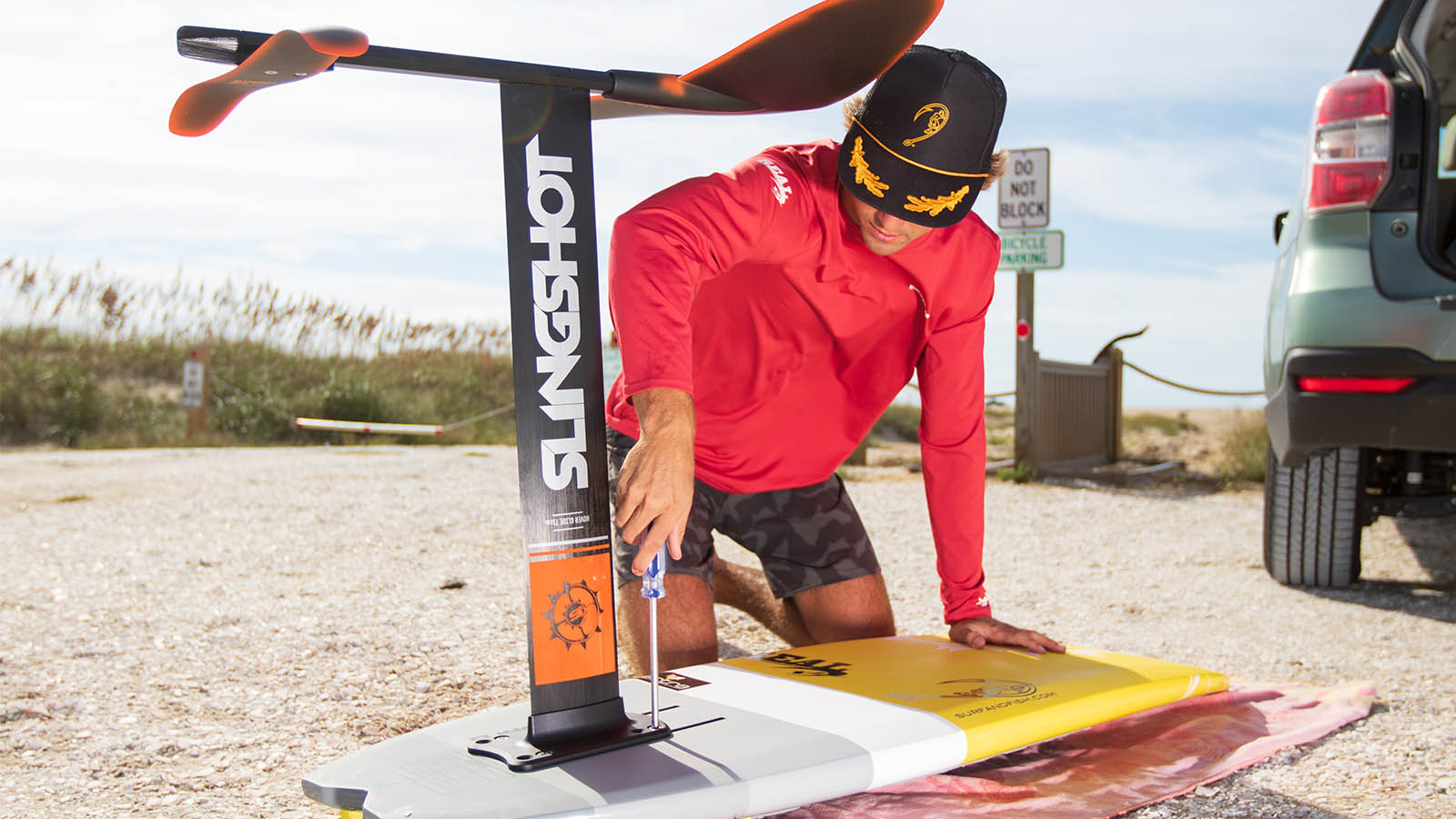 Has the foiling hype weakened? Can the sport exist beyond a niche market?
We are still riding the wave. It’s getting bigger and bigger. More people are seeing the value of it. It allows you to do whatever you love to do: kiteboard, surf, go behind a boat… You can surf in smaller waves, kite when there is less wind… In my opinion, the participation is accelerating. At Slingshot, we make foils for 5 sports: SUP, wakeboarding, surfing, windsurfing and kiteboarding. As far as numbers are concerned, we are the #1 producer of hydrofoils in the world. I’d say surfing is one of the slower markets, where people are still realizing the potential more so.

Kiteboarding and windsurfing laid aside, which one of the following has the most potential: SUP or surfing?
I like SUP for learning how to foil, because you are already standing, so it’s a bit more stable. The foils are less sensitive with the bigger board and weight on top of it, but I think surf has the bigger long term potential. When you get up on a foil, a lot of the excitment is being able to pump, and that type of thing is much easier on the smaller board. Even the pros we work with, like the Spencer brothers in Hawaii, their paddleboards are 5 feet long! These are the smallest SUPs we’ve ever seen, because they want to be able to pump. 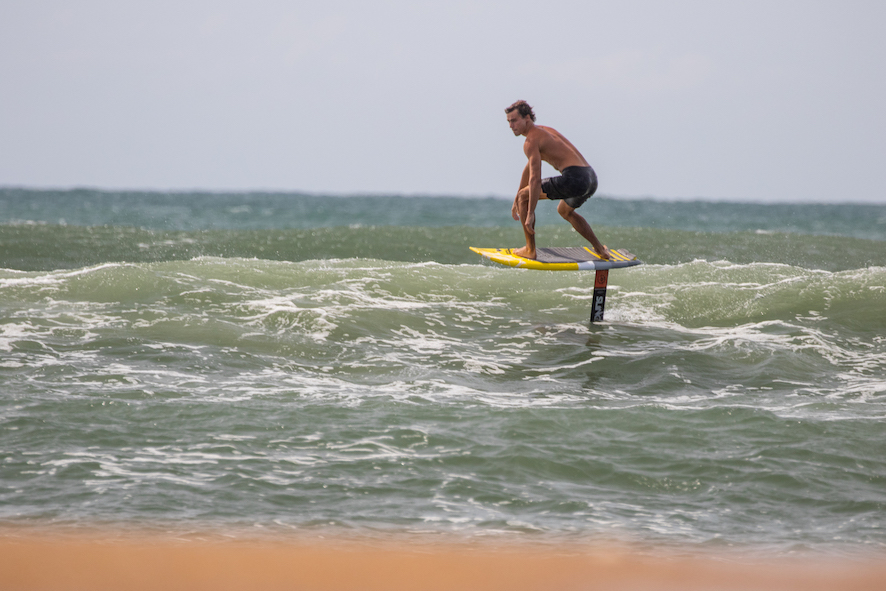 The 2-in-1 board system (foilboards that can be ridden as a regular SUP/Surfboard) has vanished in favor of foil specific boards.  How so? What are the defining features of a foilboard (SUP and prone foilboard)?
At first, people were excited and intrigued by a board which could do more than one discipline, but once people learnt how to foil, they found foiling more than doing other sports. So they’re getting less concerned about a board that does multiple sports and more concerned about getting a board that’s the best it can be for foiling. We still offer that versatility though. For example, we have a board that can be a wakesurf board or a foilboard.

To answer your second question on the defining features of a foilboard – SUP and surfing–, you want to pack as much volume as you can in a very small package. We have boards like the Skywalker or the Air Strike, which are great boards for entry-level surf and paddleboard. They ride a little bit more on the water before they take off. Then, if you want a board that is more advanced, we have the High Roller in surf and the Outwit in SUP. Those are designed to take off much sooner, designed for more advanced foilers. The S-rails help you get off much sooner, they help lift the tail early and get you up of the water. And they’re quite narrow, with a deep defined scooped out triangle rail so you can really lean in the turns and not drag the rails in the water.

Foil designs are getting abundant: small waves, larger waves, pumping friendly, stable vs responsive… Please guide us through your range ?
The Hoverglide is our biggest platform for all 5 sports, then we have a couple key wings for each discipline. For kiting, we have the Spacecake 65, for surf we use the Infinity 76, the Inifnity 84 for SUP, the Gamma 68 for wakesurf behind a boat and for windsurf. We have a few options of wings based on how fast/slow you want to go, how much lift and pump ability you want. See, if you’re riding behind a kite, you don’t really need to pump so much, but you want something which has a good speed range. Whereas when you’re surfing, you want a foil that has a great combo of speed and being agile, turn tight, and pump really well, so the Infinity series of wings has been huge for that.

Let’s take the example of the Hover Glide FSurf package, which is surf oriented. It comes with a small rear stabilizer which is great for fast paced pump: it’s like riding a bike in the lower gear. But if you put the bigger 48cm stabilizer on the back, it’s like tweaking up to the next higher gear on your bike: you push a little harder and go further. In addition to being able to change all the different wings, you can adjust the amount of lift with the Fuselage Shift: in position A, you have less lift, whereas in the B position, the wing set moves forward and gives you even more lift. The more the people advance, the more they want to fine tune the foil settings and feel of it

In addition to the premium carbon offering, more and more hybrid solutions are launched (alloy, fibre)? What is your take on those constructions ?
A lot of people love carbon and we have our all carbon Ghost Whisper foil for kiting and big wave tow-in surfing. An all new carbon platform is coming out this summer, called the Fantasm Foil. Basically, it is an evolution of the Hover Glide system, using only carbon. The Hover Glide uses carbon wings whereas the rest of the system is made of aluminum. We really like the drive you get out of aluminum. There is a little more weight to it, but it gives you more momentum. For example, riding in the surf, you’re able to cruise a lot longer before you have to pump. Some people get really obsessed with the foil having to be light, but the speed ends up maxing out and they have to pump a lot on the wave to keep that speed. Some of our testers, like Fred Hop – a kiter – has been experimenting wings filled with water ballast and he actually prefers those to a hollow wing, particularly on downwinders, again for the momentum. Both – Hover Glide and Fantasm – will remain modular, so you’re not stuck and have to buy a whole new wing set or package, you can individually customize each foil. 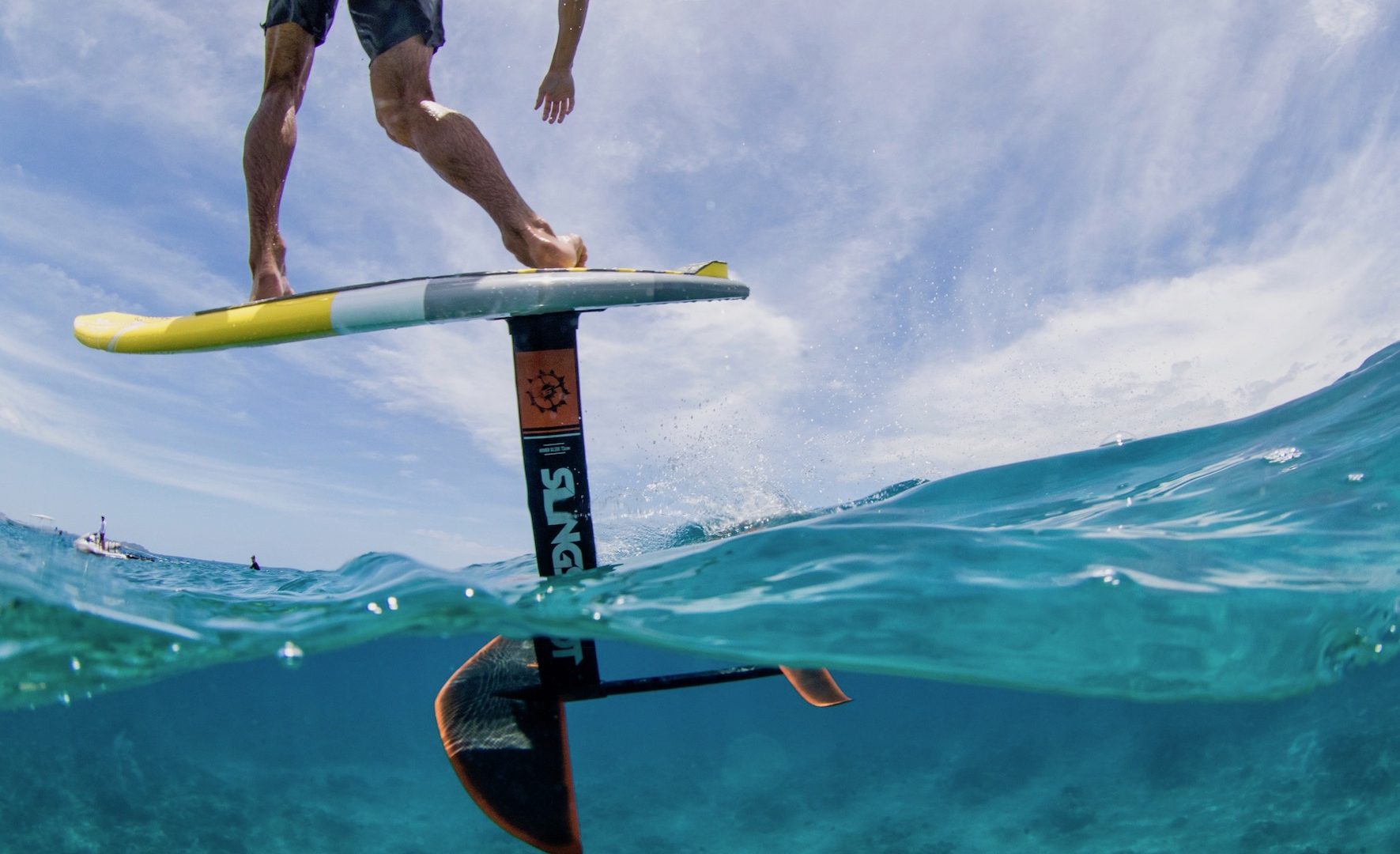 Safety remains an issue for the sport’s development : how do you handle those concerns (technically & education) ?
On the education side, we’ve created the online Foil Academy [www.foil-academy.com], you’ll find a series of videos on how to set your foil up properly, where is the best place to use them, what is the best technique for learning…. With the right information, you’ll have a lot of success and fun with minimal risk. The last thing we want is to sell foils to people and have them paddle out in the middle of the lineup in the surf: that’s not the place for a foil. The foil is for all those days the tide is too high, the waves are too small, too mushy, and nobody’s out surfing. That’s where the foil really excels. We recommend everybody to learn behind a boat or a jet ski because your speed is controlled as opposed to getting pushed in the waves and seeing what happens! Start with a short mast too. In addition, our wing tips are pointed down so you’re not hit by a sharp corner in case you fall. 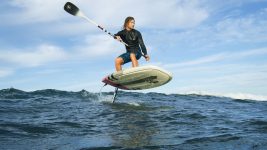 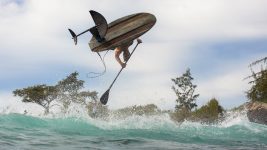 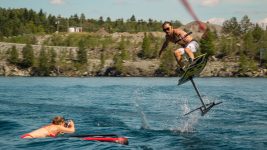