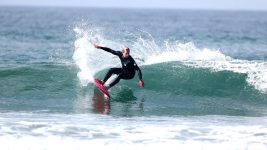 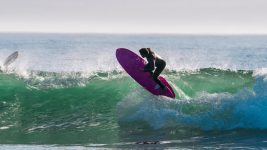 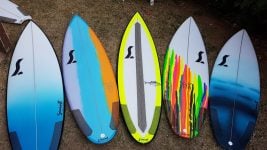 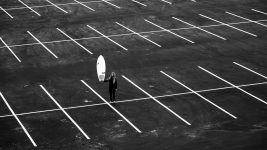 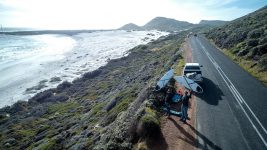 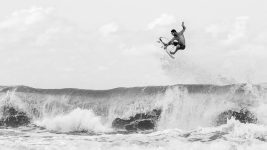 In response to the question asked by Stab magazine “has surfboard design plateaued?”, American surfer Dane Reynolds retorted: “Why would surfboards need to be innovated?”, citing a parallel with skateboard design which has been the same for decades. Between tradition and innovation, check out what the surfboards market has in store for us in 2020. By David Bianic. 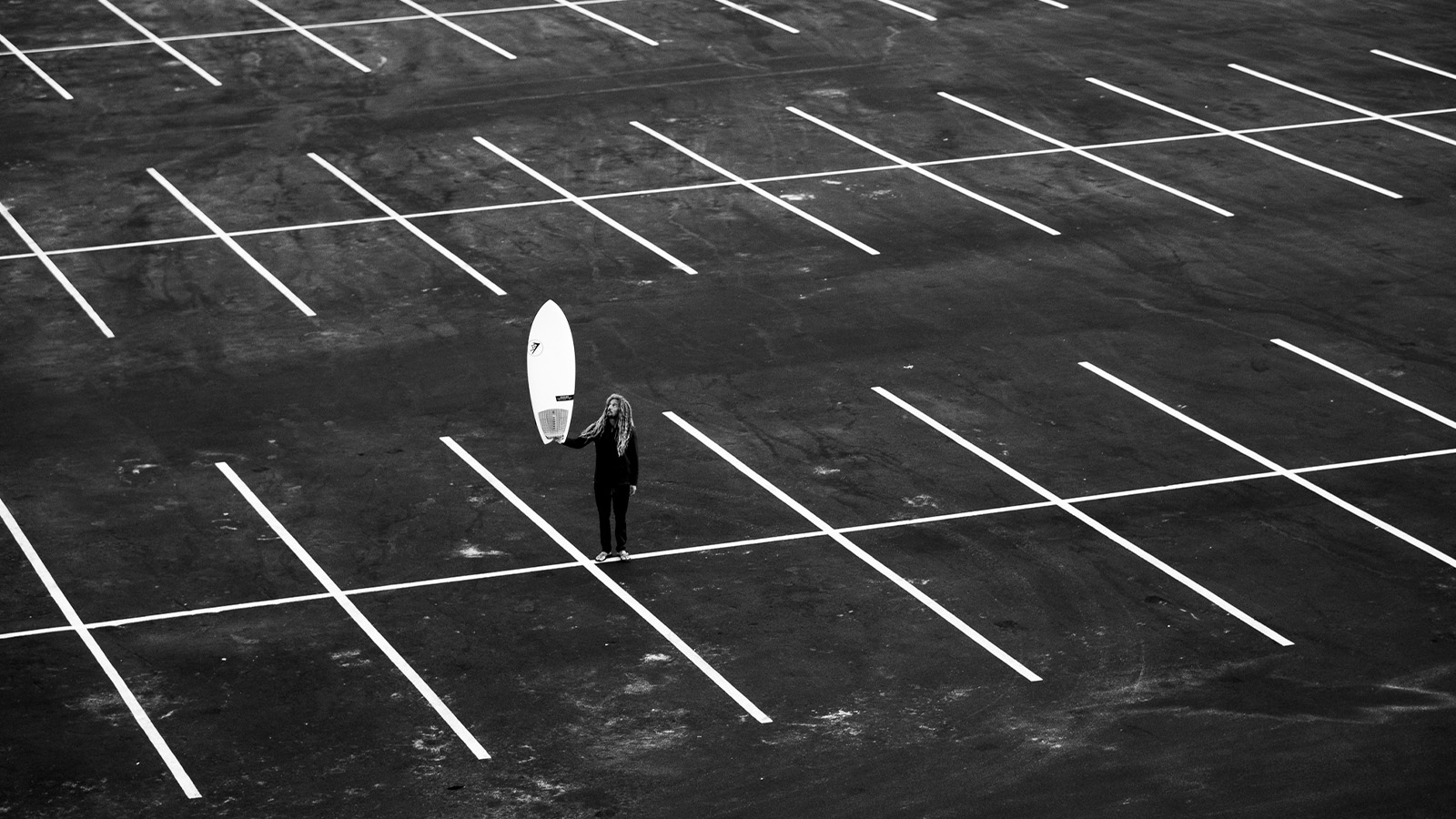 In times of crisis – at least financial ones like in 2008- the boardsports equipment sector strangely tends to prosper. Less work, more free time and a flourishing leisure market. This time, the economic paralysis brought on by COVID-19 this spring and the consequential lack of freight meant that reverting to national-level production was favourable. Have surfboards benefitted from this? While many surf shops had drawn their curtains at the start of spring, the garage shapers were ready and willing to start cutting out their foams while they waited for their customers to be freed from the confinement.

This unusual situation confirmed certain developments already noted by Bernardo Cioni at Holy Sport (Haydenshapes custom by Surftech, Walden x Surftech, Libtech, DHD…) and NSP who reported the presence of a growing market in the south of Europe for reasonably priced “PU and epoxy boards made locally, sometimes delivered to retailers in record time,” say Sander Blauw and Caren Forbes. At Surftech, this rise is not necessarily seen as a threat: “While the market is flooded with garage brands there seems to be a very solid demand for good quality product,” assures Kerry Powell, Brand Manager at distributor Jorcani Sports. Another surprising phenomenon is the appearance of “new, small to medium-sized factories acquiring expensive shaping machines aimed at large-scale production,” points out Johnny Cabianca from Cabianca Surfboards. But beware; just remember the fate of One Kin whose ambitious French manufacturing site had to shut up shop just two years after opening…

At the risk of sounding vague, remember that the trend in design terms is that there is no trend! The “ride anything” mantra is opening the door to every kind of shape and this is especially the case in Europe, states Johnny Cabianca: “A much wider range of surfboards is used here (compared to Australia where 90% of the boards are high-performance types).” Some best sellers do stand out from the crowd nonetheless. The twin, retro or modern, has become a must-have and now takes the number one spot in sales at Hurricane Surf as confirmed by CEO Craig Butcher. Their ultra-short format (5’-6’) seems to have lost popularity and we are now seeing more longer fish, like the new one from Venon, the Spectre, “a fish with a lot of volume, available in 6’3” and 6’6””, says Brand Manager, Benoît Brecq.

For Mark Price, CEO of Firewire, this is the continuation of a movement started several years ago: “The average surfer is adding more foam under his or her feet”, a trend reflected in the success of their Seaside fish, and he predicts that “the mid-length category will be cooking this year”, surely thanks to their Seaside & Beyond model, a modern long-fish perfectly showcased in the videos by Rob Machado on the usual networks. The boss at Firewire, Slater Designs & Tomo also sees it as a consequence of a population of ageing surfers.

The performance hybrid shortboard hasn’t disappeared from the racks though and Bernardo at Holy Sport reminds us that the Hypto Krypto from Hayden Shapes is still among their top 3 best sellers. This type of shape revives the idea of the “one board quiver” according to Alain Riou from Santocha, European distributor of Chilli, citing the Rare Bird model, “our Swiss army knife, from one to six foot”.

Others are refusing, in a certain sense, to submit to seasonal trends, continuing to swear by high-performance shortboards alone. But this is only partly true because the 2020 boards are hiding more generous specs behind the blade-like outline of a shred machine. Most notably, we think of the Flash Point and R2 from Chemistry: the former goes for a rounder but still sporty outline while the latter has a flatter rocker “but is not too flat for the steeper surf”, assures Commercial Director Willie Smith. It’s the same mindset for 2020’s newcomer to Pyzel Surfboards, the Pyzalien 2, halfway between the high-performance and “funformance” ranges. Pro-models continue to drive sales in this category, notably with Jadson André’s board at Matta Surfboards, the J5, just like his Lycra number from the CT. Cleverly, the shapers Nuno Matta and Ricardo Martins offer the option of ordering it “just that little bit shorter and wider” than the stock measurements, which is a way of having a pro board under your arm but staying within reach of the amateur surfer. At their Portuguese neighbours, Semente, it’s the Vasco Ribeiro model, the VR-14 that is working for their customers: “Vasco is our Top Gun on the QS at the moment”, commends Nick Uricchio, Co-Manager and Shaper. Once again, it comes down to a pro model that can suit average level surfers with “a lot of volume, comfortable width, pronounced concave and nice gentle rocker”. Pro, yes, but not too much! 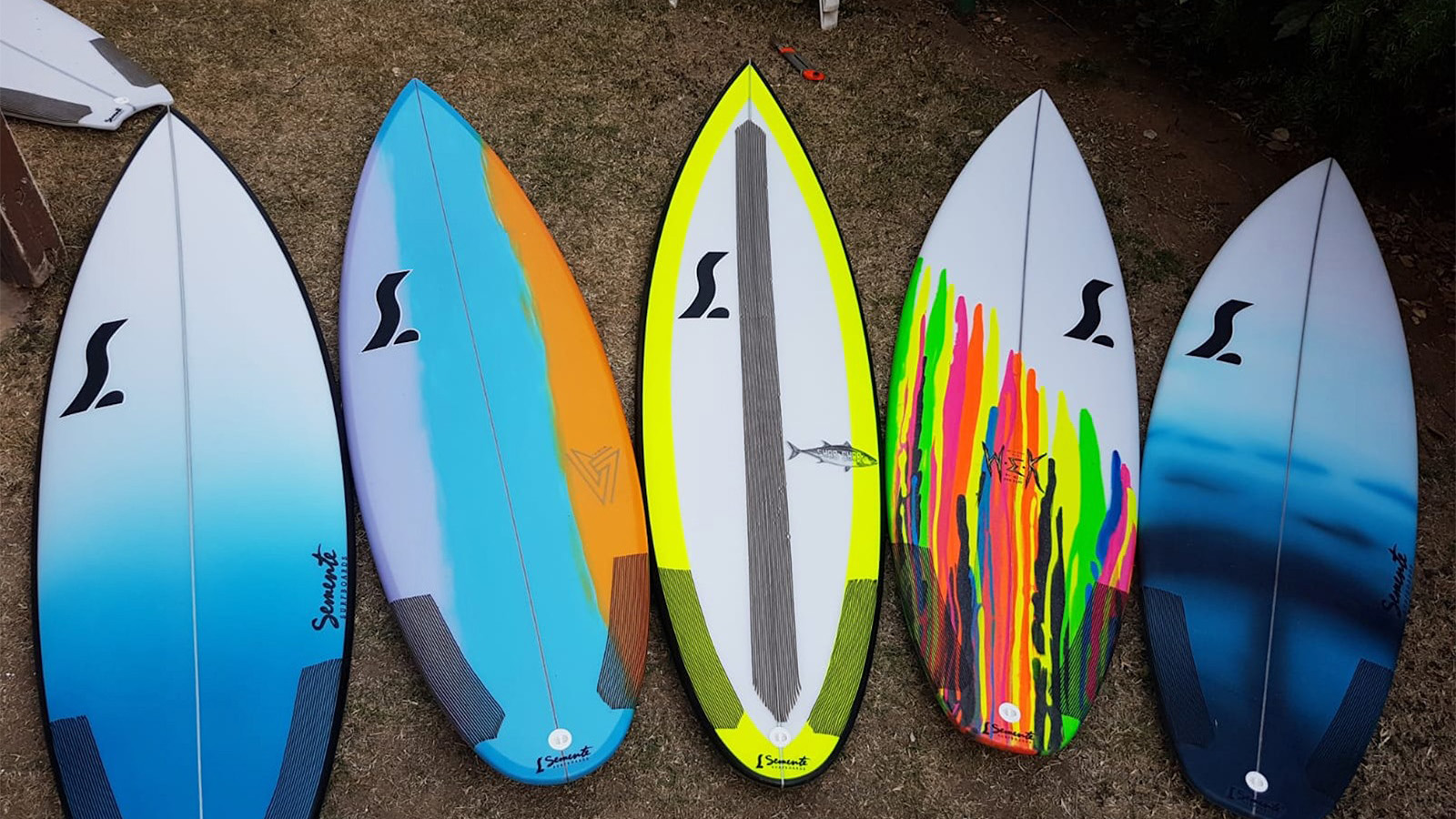 The biggest surprise comes from the (relative) boom in boards aimed at artificial and static river waves. “This is the first time we have created a special range in our catalogue”, states Johnny from Cabianca Surfboards, astonished. So it’s not surprising that regional initiatives are seeing light of day to cover this, like at the German label Kanoa Surfboards, sparked into action by “the increasing importance of the river surf segment in Germany and the overall GAS region”, as explained by its founder Thilo von Osterhausen. The country is indeed seeing many static and artificial wave projects being launched and even competitions. The other interesting point made by Thilo is “a transition from river surfers becoming faithful clients of ocean boards”. For him, soft boards represent the top choice for 70% of this emerging market, in the same mould as their Foamy Fish. Not to be missed then. 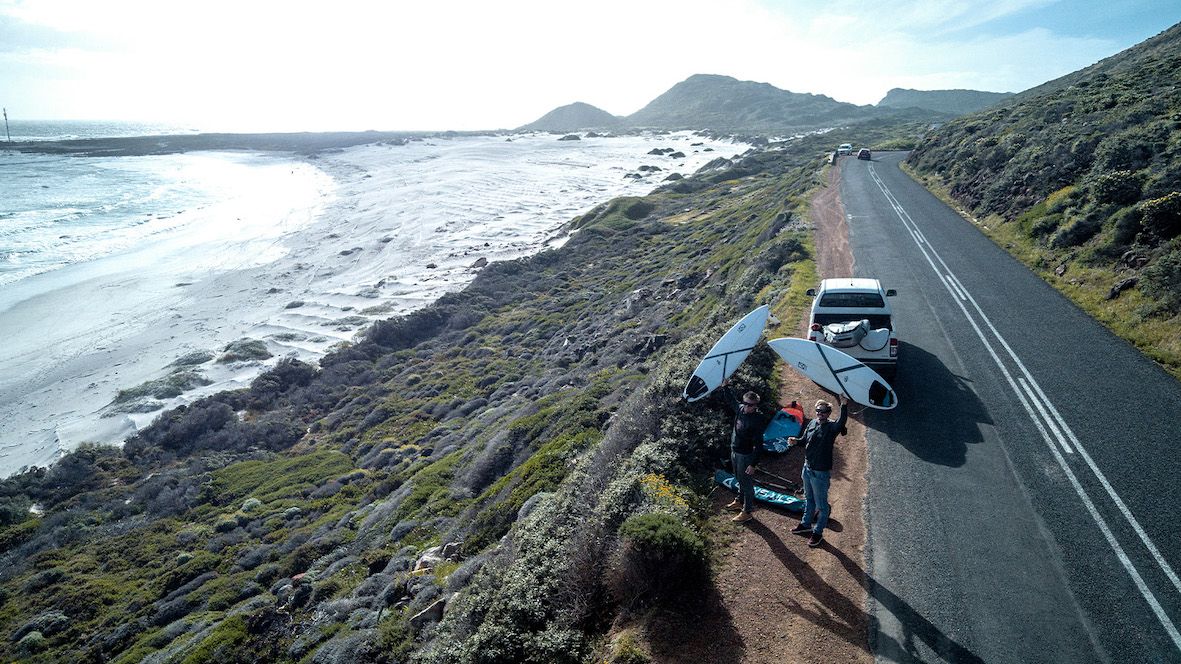 As Dane Reynolds suggested, why change something that already works? Unsurprisingly, the classic PU/polyester combo boards still come out on top in terms of sales. And for good reason, affirms Nuno Matta: “No technology can beat the flex of a PU/polyester board, especially in good waves. That’s why all the best surfers in the world use PU/polyester, like you see on the CT.” Manufacturers with a very “epoxy” heavy identity like Surftech are now also catering for this with their new Dual-Core, a mix of “the float and pop of epoxy with the responsiveness of PU on the rails”, explains Kerry Powell. The success of PU is another trait of a European market more focussed on pleasure than performance: “the retro and alternative designs are still PU boards”, asserts Andy Wirtz from Norden especially since “the polished polyester boards offer good looks” as do “polyester resin tints for the retro classic designs”. 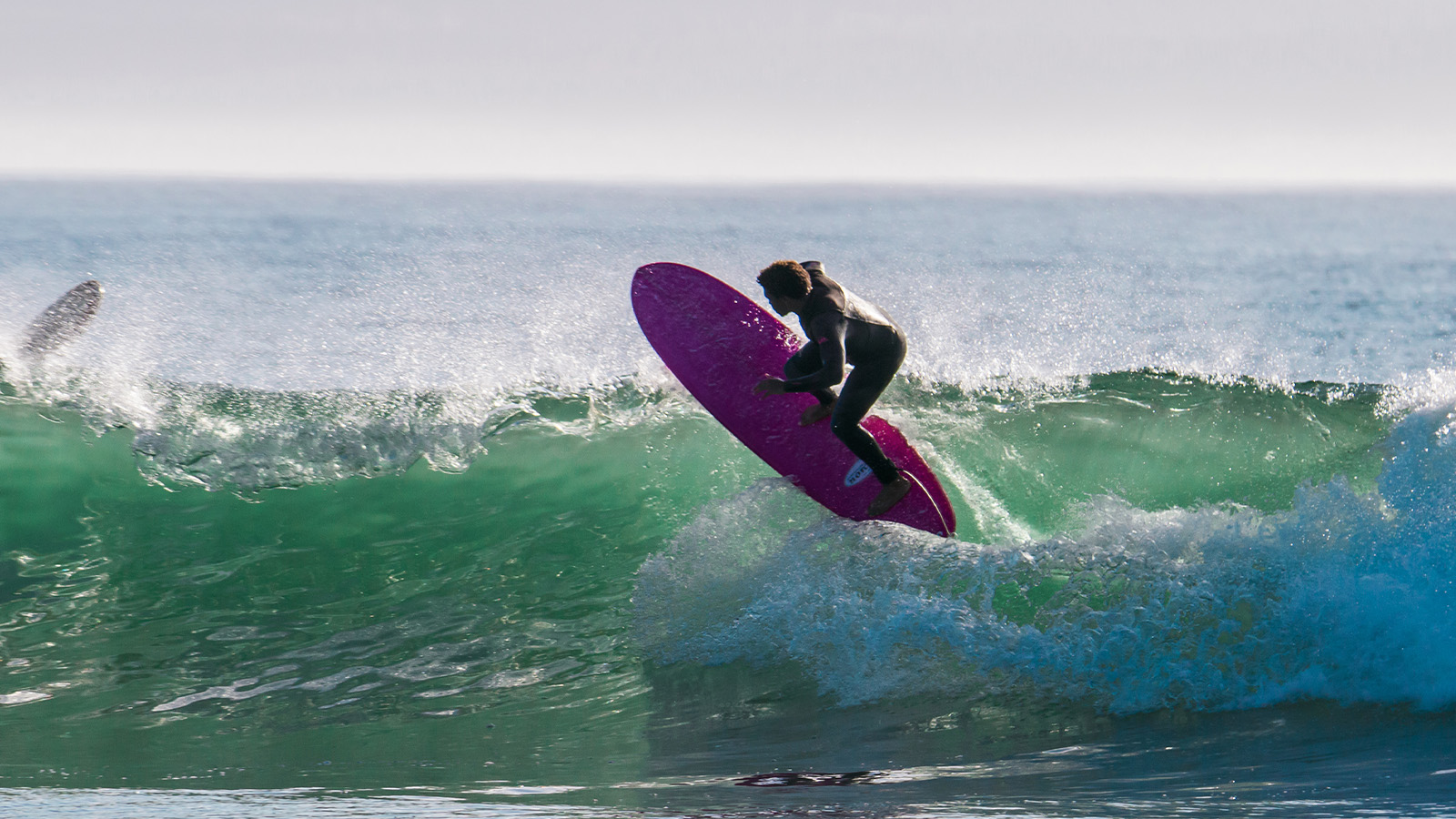 To find innovation, you have to turn once again towards epoxy boards. Torq are continuing to refine their ACT technology launched in 2019 and more specifically, an EPS board with stratification that employs a matrix of fabrics that are pre-impregnated with epoxy + hardener, as well as (non-woven) carbon reinforcements. The aim is to better control the quantities of resin used and avoid surplus to obtain a lighter board without “dead weight”, with flex and above all, “reflex”. At Xhapeland in Portugal, they are also striving to reduce epoxy consumption for the same goal: “We are using more and more infusion and vacuum techniques”, explain the team, while continuing to experiment on EPS blanks combined with carbon, Innegra, bamboo and cork reinforcements. The workshop is also experimenting with tracks of foam produced from algae, like the Algae Technology from Arctic Foam. The use of Bioresins is now widespread, just as moulded cores are no longer only destined for entry-level boards and serve to reduce the foam waste from shaping. We are especially talking about the Takayama models from Surftech labelled Ecoboard and the SecureCell blanks from NSP. 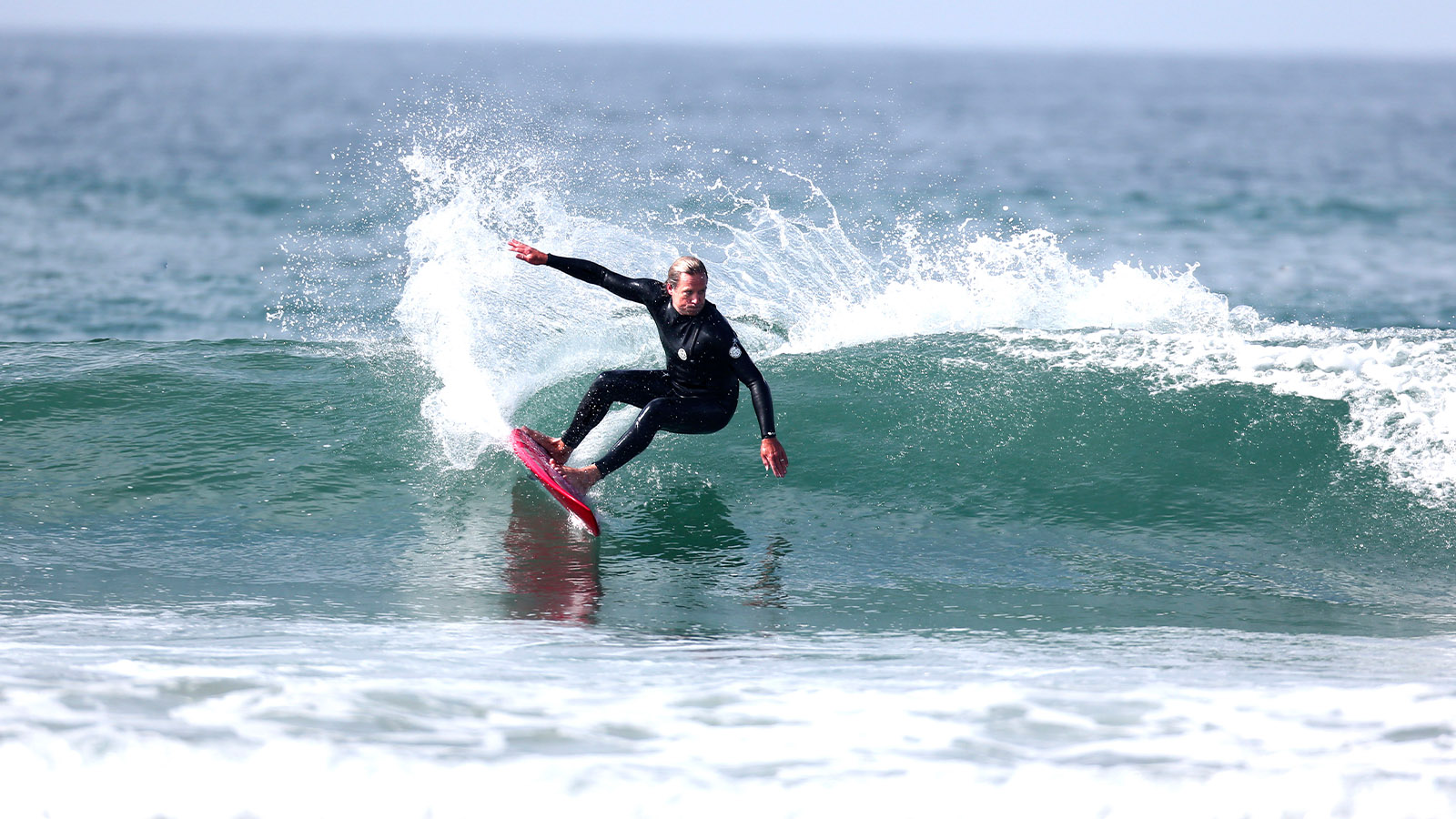 Faced with such diversity, it’s impossible for retailers to cover the whole spectrum of designs in their shops. Particularly since the shops are “full of imported boards from big brands, sometimes on consignment sale, often with long payment timeframes,” adds Johnny Cabianca. The D2C channel is therefore often a customer favourite and board labels are offering online ‘custom board builders’, like Matta, where the customer can choose everything, from “logo options, graphics, patches, technologies, and much more”. The problem comes more from the large online shops, marketplace types, regrets Nuno Viegas from Glassing Monkey (Simon Anderson Surfboards Europe), “who don’t want to deal with stock but display large amounts of product anyway”.

Then there are the in-between ways like those offered by Kanoa: “To bring D2C and retailers closer together, we are offering a ‘drop ship’ option, so that the board can be ordered and paid for in the shop but delivered directly to the purchaser’s home”.